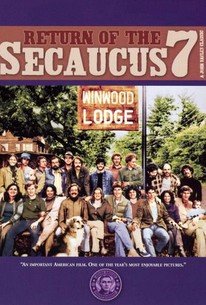 Return of the Secaucus Seven Photos

Antedating The Big Chill by three years, this engaging drama by independent director John Sayles was the first American film to take a group of former radicals and plunge them back together again many years later. Originally, seven of the protagonists were arrested back in Secaucus, New Jersey in the 1960s when they were heading out to a demonstration in Washington, D.C. Now most have married and they get together in rural New Hampshire to go over old times and find out what everyone has been doing. Their personal relationships are labyrinthian and continue to evolve, but it is their repartee and wit that spice up the drama and maintain an interest in their long sessions of dialogue.

Jeffrey Nelson
as The Man

Cora Bennett
as Singer
View All

Critic Reviews for Return of the Secaucus Seven

Preeiding the glitzy Big Chill by three years, John Sayles' first feature offers a poignant look at the reunion of 1960s activists; there's not much to look at this talking heads feature, which was shot for $40,000, but the dialogue is good.

This film is an exquisite time capsule of New Hampshire culture circa 1980. Dig the Tretorn tennis shoes.

Granola theater on the cusp of the New Right

The much praised film upon its release, a tribute to indie filmmaking, seems to have badly dated.

Return of the Secaucus Seven delivers a rueful portrait of a handful of members of the baby boom generation.

a peculiarly literate lack of focus indicative of a brilliant novelist moonlighting, at this point, as a filmmaker.

Audience Reviews for Return of the Secaucus Seven

A dull kind of proto-mumblecore that nonetheless has moments of insight and sincerity.

Well before "The Big Chill" came along, John Sayles made this terrific low-budget film. If you are looking for slick-filmmaking go elsewhere. If you want something that is different, and for me far more believable, than most Hollywood films try this one. 2 Stars 10-26-13

A film that is more important as a piece of film history than it is a good film. What it really is, is...nice. Well directed, but clearly low budget. A fun story full of drama, a bit of comedy and a very young David Statham. Worth checking out. and don't believe the gossip, while it predates Big Chill it neither inspired it, nor is it the first of the "old friends get together and..." genre.

John Sayles' directorial debut provides a poignant look at the baby boom generation -- a reunion of 1960s activists. Back in the 1960s, seven restless friends, the children of Kennedy and Abbie Hoffman, were burning with worthy causes like the War on Poverty and Vietnam. They smoked dope, engaged in affairs--and talked politics. They took off for Washington to march on the Pentagon, but only got as far as Secaucus where they were arrested on a phony charge and spent a night in the local cooler. Dubbing themselves "The Secaucus Seven," they missed the big event in the capitol, but the experience strengthened their bonds. Now, a decade later, they come together for a reunion weekend in New England, hosted by Mike and Kate, both teachers. T.J., who still dreams of becoming a folk-singer, arrives with his guitar. Irene, who once had an affair with T.J., brings her new preppie lover, Chipp. Maura, having left Jeff, is also alone. Jeff, a former Vista volunteer who now works with drug addicts, is almost tempted to try drugs himself. It's apparent that these baby boomers can't handle tension; the rift between Jeff and Maura sends tremors through the weekend. And although they put up a front of having a good time, one senses that things haven't turned out well for them -- either in terms of meaningful relationships or in terms of personal fulfillment. It's the story of a weekend reunion of a large group of old friends with complexly interconnecting life histories. In fact, watching it is like walking into a party with a bunch of strangers who all know each other and trying to digest who's married to who, who's sleeping with (or has slept with) who, who's friends, who has old scores to settle and so on. It's confusing and it reveals itself to be sloppily made, overwritten, and horrendously performed (with the exception of David Strathairn and Gordon Clapp).

Return of the Secaucus Seven Quotes