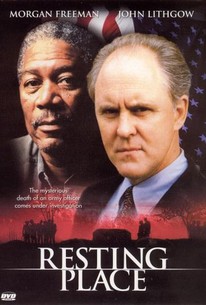 Set in 1972, The Resting Place stars John Lithgow as an Army major who accompanies the body of a young black lieutenant killed in action to the dead man's Georgia home town. Though the local cemetery is for whites only, the town's resident liberal has paid for a plot for the deceased lieutenant. Lithgow attempts to convince the racially divided community that the boy deserves to be buried in the segregated cemetery because he died a hero--but in so doing, the major unearths evidence that the lieutenant may have been "fragged" by his own troops. While it might seem that far too many issues are being raised for a mere two hours' screen time, Walter Halsey Davis' script successfully balances all the elements, and the results are both provocative and moving. The Resting Place was originally presented as a Hallmark Hall of Fame special on April 27, 1986.

There are no critic reviews yet for Resting Place. Keep checking Rotten Tomatoes for updates!

There are no featured audience reviews yet. Click the link below to see what others say about Resting Place!