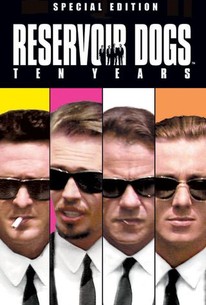 In 1992, Reservoir Dogs transformed Quentin Tarantino practically overnight from an obscure, unproduced screenwriter and part-time actor to the most influential new filmmaker of the 1990s. The story looks at what happens before and after (but not during) a botched jewelry store robbery organized by Joe Cabot (Lawrence Tierney). Mr. White (Harvey Keitel) is a career criminal who takes a liking to newcomer Mr. Orange (Tim Roth) and enjoys showing him the ropes. Mr. Pink (Steve Buscemi) is a weaselly loner obsessed with professionalism. Mr. Blonde (Michael Madsen) has just gotten out of jail after taking the rap on a job for Cabot; he's grateful for the work but isn't the same person he used to be. While Mr. Blonde goes nuts during the heist, the thieves are surprised by the sudden arrival of the police, and Mr. Pink is convinced one of their team is a cop. So who's the rat? What do they do about Mr. Blonde? And what do they do with Mr. Orange, who took a bullet in the gut and is slowly bleeding to death? Reservoir Dogs jumps back and forth between pre- and post-robbery events, occasionally putting the narrative on pause to let the characters discuss such topics as the relative importance of tipping, who starred in Get Christie Love!, and what to do when you enter a men's room full of cops carrying a briefcase full of marijuana. ~ Mark Deming, Rovi

And while Tarantino never quite succeeds in putting around each character the sense of isolation that marks the best noirs, he carries off this exercise in lively fashion. It's more purple than noir, but it's got juice.

No one should go to Reservoir Dogs without prior thought. But what they will see is a riveting treatise on the theme of betrayal set in an urban wasteland that murders hope and makes redemption virtually impossible.

The exaggerated raw violence of "Reservoir Dogs" leaves one feeling cheated in the end. For this movie isn't really about anything. It's just a flashy, stylistically daring exercise in cinematic mayhem.

Perhaps it's a bit too knowing in places, and perhaps it packs in one pop cultural reference too many, but this is an in-your-face, look-at-me kind of debut, designed to function as the calling-card of a major new talent.

The film, for all its mayhem and fury, is too distant to be truly disturbing; it treats everything with an impatient, born-too-late shrug.

A brash, brutal crime-caper film, Reservoir Dogs has enough raw energy for 10 motion pictures and more than enough rough stuff to traumatize the sensitive. But not only does Dogs have teeth, it has brains.

An amazing narrative prodigy that is the story of a spoiled robbery which, right now, I would point out as Tarantino's masterpiece. [Full Review in Spanish]

There are good performances all around as Reservoir Dogs veers to its ironic, almost absurdist climax. In addition to his clever plotting, Tarantino has given his cast sharp, acrid, sometimes witty dialogue.

...one of the most impressive debut features in cinematic history.

No matter how many times you've freeze-framed the bit at the end, it's still up there with Die Hard and Taxi Driver as one of the great once-a-year indulgences.

One of the lynchpins of this work is how it strongly relies on and fully expects that the viewers have seen other films like this and seen so many perhaps that they'be grown tired of the genre. That's where this begins and ends, upsetting all those previous expectations, and laughing at them as well. It's a fun ride.

A bloody, violent and darkly-humored crime movie that already showcased Tarantino's talent for crafting stylish narrative exercises full of energy and elongated exchanges of dialogue, even if we can see that this was an intelligent filmmaker still only at the start of his game.

"Somebody's stickin' a red hot poker up our asses and I wanna know who's name's on the handle" Before becoming a cinematic auteur a young Quentin Tarantino worked in the film rental store Video Archives in Manhattan Beach, and would often recommend little-known titles to customers. On one occasion, he suggested Louis Malle's "Au Revoir Les Enfants", to which the customer mockingly replied, "I don't want to see no Reservoir Dogs." And so the title of Tarantino's blistering debut film was born. It was originally planned as a $30,000 personal film with his friends, before Harvey Keitel showed an interest in the script and came onboard as the star and co-producer which helped hike the budget up to $1.5 million. The rest, as they say, is history. Tarantino had finally made his mark on the movie map and has since become one of the most highly praised directors of his, or any other, generation. Crime lord Joe Cabot (Lawrence Tierney) and his son Nice Guy Eddie (Chris Penn) assemble a crew of trusted criminals who they appoint with colour coded aliases to protect their identity: Mr. White, (Harvey Keitel), Orange (Tim Roth), Pink (Steve Buscemi), Blue (Eddie Bunker), Brown (Quentin Tarantino) & Mr. Blonde (Michael Madsen). Their plan is simple: rob a jewellery store and make off with the diamonds to a prearranged rendezvous. However, the robbery doesn't go down well and those that are left alive suspect that they have a police informant amongst them. Few debuts have made as much of an impact on cinema goers as Reservoir Dogs has. It heralded the arrival of an energetic new writer/director and opened up the floodgates to numerous crime imitations thought the 1990's. Few, if any, achieved the same impact. However, there were some that criticised Tarantino for being a plagiarist. There were obvious references to films like Stanley Kubrick's The Killing, John Huston's The Asphalt Jungle, Joseph Sargent's The Taking of Pelham 123 and most notably Ringo Lam's City on Fire. Without a doubt, Tarantino was influenced by these movies but stealing is a very strong accusation. Now, many years and several more films down the line, I think it's fair to say that Tarantino has an extensive film vocabulary and often pays homage to some of his favourite filmmakers. Film knowledge may be deemed esoteric by some but in Tarantino's case it helped him craft three of the best films from the 1990's - along with Dogs there was, of course, Pulp Fiction and the vastly underrated Jackie Brown. And besides the point of plagiarism, it was Tarantino's dialogue (entirely his own) that received the most praise for it's true originality. His characters talk fast and the words seem to jump of the screen and that's exactly where Reservoir Dogs' strengths lie. If it wasn't for the non-linear, chronology of events it would essentially be a chamber piece. Set largely within the confines of an abandoned warehouse, each character talks through what actually went wrong during their bungled heist. The heist itself is never witnessed as Tarantino decides to focus on the aftermath of the robbery rather than the event itself but it's the sharp and descriptive dialogue that allows these events to come to life in our imagination and each of the actors are allowed to spout their words with as much colour and vibrancy as their blood soaked shirts. There are many highlights amongst the ensemble but the three that stand out the most are the loyally professional Harvey Keitel, a highly-strung and opinionated Steve Buscemi and the cold, psychopathic Michael Madsen. If I had any issues with the cast at all, it would be Tim Roth's tendency to overplay his work. He, by no means, delivers a poor performance but too often over acts and his personal section of the story interrupts an otherwise precisely structured flow. This is a small gripe as Tarantino still has a solid handling on the material and executes it with the deftness and skill of a director twice his age. On this evidence alone his extensive, esoteric knowledge of film certainly paid off - not only for him but for the viewer. Heavily influenced by the likes of Martin Scorsese and Brian DePalma, among many other filmmakers, Tarantino was certainly not the first to use non-linear storylines, Steadicam techniques or distinctive soundtracks but he was a luminary to ambitious young directors that followed, and a lot of that came from this breathtaking film that set a whole new benchmark. One critic described Reservoir Dogs as "...a bloody, brash, brilliant heist thriller that grabbed audiences by the lapels and kneed them in the crotch"... I couldn't have put it any better myself. Mark Walker

At the beginning of the nineties, Kurt Cobain and Nirvana looked in disgust at the formulaic, soulless lumbering cash cow guitar music had become and using cues from grittier, purer classics of the past singlehandedly swept away the self serving excesses of the genre and revolutionised it forever. Quentin Tarantino did exactly the same thing with cinematic crime drama. He examined the logistics of both being an undercover cop and planning a heist and introduced believable characters who spoke like real people; they weren't just posturing stereotypes punctuating another set of pointless explosions and car chases. He created an ensemble cast of actors for their charisma and ability, not their box office drawing power. He scored it with wit using obscure music from the past that complimented the action rather than trying to make a fast buck selling yet another insipid rock ballad to people who don't listen to music. Tarantino has often been accused of plagiarism, and this script does 'borrow' from City On Fire and The Taking Of Pelham 123. But if you ask me, an original but bad film is still a bad film, while an unoriginal but brilliant film is still a BRILLIANT film.