The Rescuers Down Under1990 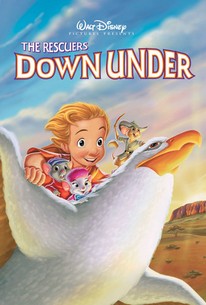 Critics Consensus: Though its story is second-rate, The Rescuers Down Under redeems itself with some remarkable production values -- particularly its flight scenes.

Critics Consensus: Though its story is second-rate, The Rescuers Down Under redeems itself with some remarkable production values -- particularly its flight scenes.

Critic Consensus: Though its story is second-rate, The Rescuers Down Under redeems itself with some remarkable production values -- particularly its flight scenes.

The Rescuers Down Under Photos

The sequel to the 1977 Disney animated feature The Rescuers finds mice Bernard and Bianca en route to Australia to come to the aid of a young boy and a rare eagle.

Critic Reviews for The Rescuers Down Under

This sort-of sequel to the 1977 hit The Rescuers boasts reasonably solid production values and fine character voices. Too bad they're set against such a mediocre story that adults may duck.

As for the animation, computer technology invests contemporary features with sometimes breathtaking dynamism, but outback flora being what it is, this isn't the most colourful Disney movie.

The film's direction, by Hendel Butoy and Mike Gabriel, is spectacularly inventive even when not fully appropriate to either the film's subject or the very young viewers it can be expected to attract.

The flight sequence and many of the other action scenes in this new Disney animated feature create an exhilaration and freedom that are liberating. And the rest of the story is fun, too.

A gorgeously drawn myth made for plucky children and very brave mice.

Carries its ambitions with an easy grace, expanding the art of animation to fresh ground without losing sight of the silly fun we love cartoons for.

They were clearly going for an Indiana Jones vibe with Rescuers Down Under and in every way they succeeded.

Better than its predecessor.

Tweaks the formula with a brisker pace, and development of leading characters...and action sequences... [Blu-ray]

A rare sequel that improves on the original.

There's only the one thing it does flat-out wrong: this otherwise delightful adventure-comedy has a completely meandering, aimless story.

The villain is far too malignant, the young vigilante hero seems to be a kiddie Rambo, and some of the action is quite violent, if not tasteless.

Audience Reviews for The Rescuers Down Under

I've gone on about how this is probably one of Disney's most underrated films, I think that mainly has to do with how poorly advertised it was, which is a shame because this film is just amazing. Not only is it a major improvement over the first film, it is a major improvement in every respect. The villain is one of the best villains I think in Disney history. Mcleech just adds so much to this film mainly due to how incredible George C. Scott does the voice. also this film has a world record for being the first digitally animated hand drawn film and it looks amazing, especially the scenes involving the eagle flying.

A barely passable sequel that is not that much better than the detestable first film, off to a good start and with amusing moments (especially in the flight scenes) up until halfway through when it starts to become aimless and forgettable like most pre-Disney Renaissance productions.

Decent sequel to the Rescuers, however it lacks the thrills that made the first one so exciting. What made The Rescuers such an entertaining film was that there was always something exciting happening, but with this one, instead of delivering a great sequel to a good film, this is a good film but it lacks something to really make it special. Overall it's decent, mindless fun, but compared to the first, it just doesn't stand out. Nonetheless even if it's just a decent film, if you enjoy Disney flicks, then you'll probably like this one. Though not as great as the first, there are still elements in the film to really make it entertaining viewing for the entire family. I just think for this one, the filmmakers could have put a bit more effort into the film because there were some good ideas on-screen. Despite its flaws, this film is lots of fun, but it does lack compared to the first film. For what it is though, this sequel is fun, even if it lacks anything truly special. If you're a fan of the first you're going to like this one, but you'll still feel there's something missing to make it very good. As far as Disney sequels are concerned, this is one of the better ones, as sequels in the Disney catalogue tend to be very bad. However this one is decent and entertaining despite all its imperfections. Not a great film, but still charming for what it is, this sequel is fun and in the end that's what matters.

The Rescuers Down Under Quotes