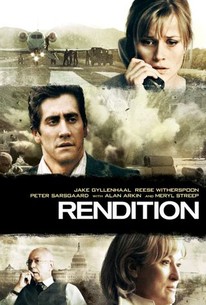 The director of the Academy Award-winning 2006 crime drama Tsotsi returns to the helm with this tale of a Middle East CIA operative who begins to have doubts about his latest assignment after witnessing the interrogation of a suspected suicide bomber by secret police. When Egyptian-born chemical engineer Anwar El-Ibrahimi (Omar Metwally) mysteriously vanishes on a routine flight from South Africa to Washington, his wife, Isabella (Reese Witherspoon), embarks on a frantic international search for her missing husband. At the same time, a CIA analyst (Jake Gyllenhaal) arrives at a clandestine detention facility outside of United States. As the interrogation of El-Ibrahimi gets under way, the CIA analyst is profoundly shaken by the unorthodox methods used by the man's captors, and quickly begins to reevaluate his assignment. Peter Sarsgaard, Meryl Streep, and Alan Arkin co-star in this topical political thriller penned by Kelley Sane and produced by Steve Golin. ~ Jason Buchanan, Rovi

RT on DVD: Cram For The Oscars With Michael Clayton, In The Valley of Elah, And More Out This Week
Box Office Guru Wrapup: Vampire Flick Scares Up #1 Debut
Box Office Guru Preview: 30 Days of Night Gets Halloween Started Early

I don't fault Rendition for its liberal politics. I fault it for hammering home those politics in such pounding, slanted fashion.

If these new, allegedly topical movies are to make us feel anything -- to move us toward any action or even just toward any fresh realization -- they need to at least seem alive on the screen, instead of just courting our polite, measured applause.

That it's embarrassingly plausible, that it depicts things that have happened and that are probably still happening, is enough to make Americans sick to their stomach.

What finally gives Rendition its headlong narrative momentum is the sense that we're rarely certain what argument the filmmakers are endorsing.

It's one thing for a thriller to be timely, quite another for it to function as Rendition does, a gripping piece of entertainment with a clear head on its shoulders.

Rendition, while engrossing, does not grab us as it should.

Rendition is a barely tolerable narrative masquerading as an important film.

Designed to make us feel like we've just witnessed a powerful experience. The reality of the film is that it's nothing but a shallow and underdeveloped position paper.

Rendition features decent performances by all its actors, although few are given any chance to shine.

Rather then telling a story with characters growing and exploring the politics of the world around them, they simply take up the roles of well-dictated automatons.

The film unfolds brilliantly and methodically, as director Gavid Hood's vivid characters are unwittingly drawn together.

Well acted and asks some questions more people should be seeking answers to.

I had heard mixed things about Rendition. When I finally gave it a shot, I didn't understand why people where a bit negative towards the film. The film is a well crafted thriller and is one of the better genre films to come out in quite some time. The cast here are well assembled and they each deliver good performances. The story of the film is very engaging, thrilling and intricate. Rendition is a solid film and works as political thriller. The story, I felt was very strong and well developed. I very much enjoy these types of films that blend espionage, action and thrills into one film. Rendition is a solid thriller that delivers edge of you seat entertainment, and the cast make this film much better than it is. Especially with lead actresses such as Meryl Strep and Reese Witherspoon. Rendition's plot is engaging, and I thoroughly enjoyed this film. This is a brilliant film that was well conceived. Director Gavin Hood crafts a solid film and Rendition is better than what most people may think. This is a well made film with good performances and a great plot. If you're looking for a good thriller, Rendition is that film. The film is worth watching, and has enough thrills to keep you engaged. Rendition is a good film that doesn't deserve the flack it has received. This is a good film that will appeal to viewers looking for a solid thriller.

Interestingly 'unHollywood' for a 'Hollywood' film and certainly do not judge this as a typical Reece Witherspoon film, it's anything but! Opinions will vary on Intelligence methods, either way it's a voyeuristic view of something that the average person would never witness. Fears for the innocent arise, fears for extremists slipping through the net arise. Enjoyable, gritty and a situation no one would like to find themselves in.

It actually is an under rated movie, it is better than what people think! The story is original, I've never seen other like this before. Jake Gyllenhaal does not do that much role in the film, but his acting is great. Reese Witherspoon have a great character and she illustrates a desperate mother searching for her husband really well. Other great actors are Alan Arkin, Peter Sarsgaard and Meryl Streep. A really politically thought-provoking one but in some parts look a bit biased. It's a problematic story that everyone should think about.