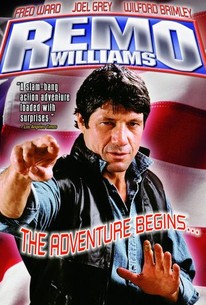 Adapted from the "Destroyer" series of novels and comic books (not exactly the level of Ian Fleming), Remo Williams (Fred Ward) is a New York cop who works for a top-secret government agency accountable directly to the President of the U.S. After his reluctant induction into this agency, Remo is trained in a near-magical Korean martial arts form by Chiun (Joel Grey) in great sequences where walking on water is taken in stride. After his training, Remo goes after a corrupt arms manufacturer with connections in the U.S. military and acquires the necessary help-mate in the form of Major Rayner Fleming (Kate Mulgrew). Antics at the Statue of Liberty and other stunts enliven the action, but cannot make up for comic-book level characters.

Will Jeffries
as Young Captain

Duane B. Clark
as Logger

You can get carried along by the exuberance and likability of Remo: The Adventure Begins, only to have the despair of the pop mythology underneath it catch up with you the morning after.

Remo Williams is one of the most outright enjoyable action adventure films to ever come out of the 1980s, science and logic be damned.

A missed-opportunity exercise that might as well have been called Remo Williams: The Adventure Begins ... and Ends.

A disappointing film, Remo Williams was meant as a star vehicle for Fred ward and as the first chapter of a franchise, but, alas, neither thing happened.

...a sporadically watchable (yet surprisingly dull) piece of work.

A terrific piece of escapist entertainment that deserved to be a much bigger hit. Makes you wish there were more Remo Williams movies.

And it ended almost immediately.

More comedic than actioner, this work is more for the yuks than for oomph. Mainly it comes across as hokey anymore, but it's good for a Saturday rainy afternoon.

With a title like that its gotta be an 80's action flick, you just don't get titles like that anymore huh. Based around some popular pulp stories which are themselves quite dated now (early 70's), this film was apparently meant to be the first part in a franchise which never came to be. I remember watching this as a kid and loving it, had it recorded on VHS and used to rewatch it over and over. Looking back now I'm not really sure why, despite the fact the film was released in 85 you'd think it was 75 because my God its so quaint and dated looking! The whole gist of the thing is pretty much your light-hearted James Bond angle mixed with a dash of 'The Karate Kid' really. A top NY cop has his death faked unwillingly so this undercover government agency can recruit and train him to be a killing machine. The funny bit is he is trained up by this 'Mr Miyagi' type character which you may think is me just using that cliche...but I'm totally not. Only difference is this Mr Miyagi is from Korea and is played by an American in heavy, yet very good makeup...racial issues cast aside! The film isn't a violent film at all despite the assassination theme at the core of the films story. Remo is a highly skilled ex-Marine and thusly was chosen to be an undercover agent, but like some Bond flicks the violence is minimal and what there is has been edited so you don't see much. In this sense it almost feels like a spy movie for kids or young teens, that along with the cringeworthy humour that has been injected into the film for whatever reason. Most of that humour comes from Mr Miyagi (yes that's what I'm gonna call him) as he behaves in the same uber spiritual, disciplined way with little dialog but lots of cheeky philosophical quips. That is countered by Remo, played with much swagger by Fed Ward, who at first is of course cocky, loud mouthed and rebellious to his instructions...whilst being clumsy accident prone and the butt of many Miyagi quickfire put downs and movements. Together they make a cute couple and it is amusing watching the absurd techniques used to train Remo...which he manages to conquer quite quickly. Dodging bullets huh we don't actually see how he is trained for that but he manages to do it in the end, ditto running on liquid or soft material. Its a strange action film truth be told because it never really feels like an action film. Most of what we see is dialog between characters, either the good guys who are always snooping around and planning, or the bad guys who are always driving around in black limos and also planning. The action we get is very tepid and short lived, the only real thrill is seeing Remo fight against some construction workers atop the Statue of Liberty (did the bad guys actually just pay some blue collar workers to kill someone they don't know by booting them off the top of the Statue of Liberty?? who would accept that? surely you'd get the sack for gross misconduct lol!). The stunts are very good throughout the film I can't deny, its all very Bond-ish as said, but the film does rely on those stunts to get it through the run time, not much else going on. The whole final act set within this forested military base is very dull, more dull than the rest of the film! Again there are stunts here and there which are reasonably impressive but its hardly epic, what the hell was that log on a cable thing? what was that?!. We never really see Remo using any of his special skills until right at the very end, we never really understand who and what CURE are suppose to be or do accept eliminate people they think are bad, plus there are only three members of CURE including Remo?! I can't complain about how unbelievably old this looks (it is really really dated!), but I can moan about how boring and daft it is. I'm not really sure if it was meant to be an adult franchise, I don't know anything about the books but I'm kinda guessing its more for the older person? really can't tell with this film though. It swings from sweaty palm thrills (no don't even go there) to a sniff of actual possible visible violence to complete childish tomfoolery, all this set around some of the most mundane looking sets and locations you've ever seen (apart from Liberty Island). Plus points for Ward who is good fun as the bent nosed tough guy Remo, Grey as Mr Miyagi and a very early role for Kate 'Captain Janeway' Mulgrew who actually looks quite tasty. Man I tried to enjoy this, believe me I did, it was a part of my childhood...but the rose tinted lenses have been sat on by a popcorn scoffing troglodyte.

This action adventure was meant as start of a James Bond-esque franchise, but flopped at the cinemas back in the day. That doesn't mean this isn't an enjoyable film. It doesn't take itself too serious, has wonderful parts of humor, especially in the relation between Remo and his Asian master. That tongue-in-cheek attitude is necessary if you deliver a movie where people walk on water. The majority of the stunt work is good old-fashioned stuff, with actual people hanging from all kinds of high places. the highlight being a chase around the scaffolded statue of Liberty. Sure, the pace and filming of the film feels a bit dated today, but that doesn't lessen the enjoyment. Entertaining, likable action film that would have deserved a larger audience.

This movie has action, comedy, outrageous and silly stunts... it's stupid, but fun. It could have been a better movie, though. It needed some funnier jokes, a couple of better actors maybe, at least for the bad guys, and maybe they could rewrite the script a little. As it is, the ending isn't satisfactory, we need more to the story, but the rest of it is mostly entertaining.