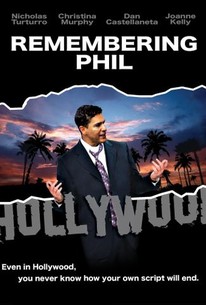 Television writer Phil Winters struggles with a surreal existential crisis when he returns home from vacation to discover that he no longer exists in the eyes of his former friends and colleagues. Now, the harder Phil searches for validation of his own existence, the more it begins to feel as if his past was nothing but an illusion. But when a young girl named Debbie approaches Phil and claims that he is her father, the two pair up to solve the mystery of the collective amnesia that has made Phil a stranger in his own world. ~ Jason Buchanan, Rovi

There are no critic reviews yet for Remembering Phil. Keep checking Rotten Tomatoes for updates!

There are no featured reviews for Remembering Phil at this time.