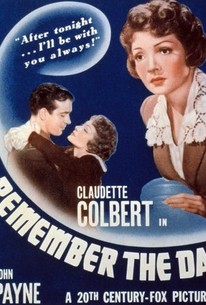 A nostalgic and patriotic film from director Henry King similar to such later films as The Corn Is Green (1945). Claudette Colbert, stars as Nora Trinell, an aging schoolteacher awaiting a meeting with presidential candidate Dewey Roberts (Shepperd Strudwick). As Nora waits, she reflects on the past. It seems that a young Dewey (Douglas Croft) is Nora's pupil many years earlier in 1916, and has developed a schoolboy crush on his teacher, who encourages him to pursue his dreams. Nora, however, is quietly married to a fellow teacher, Dan Hopkins (John Payne), which inspires Dewey's jealousy when he discovers the truth. Tragedy awaits Dan, however, when he joins with the Canadian forces entering World War I.

Douglas Croft
as Dewey as a boy

William B. Davidson
as Committee Man

Critic Reviews for Remember the Day

The movie gives us a message of peace and tolerance that won't be easy to forget. [Full Review in Spanish]

Audience Reviews for Remember the Day

A bit too sentimental for its own good but overall an enjoyable picture.