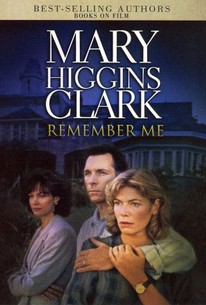 Still recovering from a breakdown caused by the death of her son two years earlier, Menly Nichols (Kelly McGillis) convalesces in the old mansion where her husband Adam (Cotter Smith) grew up. The emotionally fragile Menly is having difficulty enough adjusting to her somewhat dank surrounding when she begins to be haunted by an eerie, faraway voice. Could the sounds be merely a manifestation of her trauma and guilt feelings--or are they caused by the ghost of her son, desperately trying to contact her? Whatever the case, trouble clearly lies ahead for both Menly and her baby daughter Hannah--and that trouble may or may not be linked with a murder case for which Adam has been hired as attorney for the defense. Based on the novel by (who else?) Mary Higgins Clark, this filmed-for-TV gothic melodrama made its CBS network debut on November 19, 1995.

Maxx Tissenbaum
as Bobby
View All

Critic Reviews for Remember Me

There are no critic reviews yet for Remember Me. Keep checking Rotten Tomatoes for updates!

There are no featured reviews for Remember Me at this time.