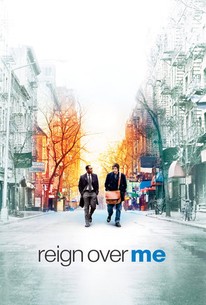 Critics Consensus: Reign Over Me is a charming, affecting tale of friendship and loss, with solid performances from Adam Sandler as a broken, grief-stricken man and Don Cheadle as his old friend and savior.

Critics Consensus: Reign Over Me is a charming, affecting tale of friendship and loss, with solid performances from Adam Sandler as a broken, grief-stricken man and Don Cheadle as his old friend and savior.

Critic Consensus: Reign Over Me is a charming, affecting tale of friendship and loss, with solid performances from Adam Sandler as a broken, grief-stricken man and Don Cheadle as his old friend and savior.

Reign Over Me Photos

A man, who lost his family in the Sept. 11th attacks and has never recovered from his grief, runs into his former college roommate who is determined to help his ex-roomie come to grips with his loss.

News & Interviews for Reign Over Me

View All Reign Over Me News

Critic Reviews for Reign Over Me

This film manages to be not just bearable, but on occasion actually quite affecting.

Without Sandler, Reign Over Me would be a gloopy, post-9/11 love-in, making cavalier use of a fine but helpless cast.

It's as if 9/11 was simply coopted to bring an extra weight to a script that couldn't be trusted to deliver on its own.

Director Mike Binder has twigged on to the fact that if you root Sandler's genially churlish moron act into a more sober foundation, a vulnerable, believable and even lovable character can begin to emerge.

Binder does an excellent job of creating interesting characters with compelling stories and sprinkles in some humorous moments. The characters are given life by a talented cast.

Binder's screenplay is a thing of gentle beauty, and indeed so is the film as a whole.

Mike Binder likes to fatten up his movies with side stories... These asides are distracting and enjoyable if a little flabby in places. This detracts from what is mostly a thoughtful, even stupefying study/comedy of human frailty.

Mike Binder, a director of TV-sized smarm, continues to dismantle his own best effects

Reign Over Me is like spending two hours with a shrink. Self-absorbed and repetitive, it has an occasional moment of truth, and a lot of hot air.

A personal drama made accessible by Binder's unusual touch.

Audience Reviews for Reign Over Me

Such a good change of the normal Sandler filck. This was really heartfelt and emotional. Sandler shows he's got real acting chops and show people in the real road, which I am a fan of. Amazingly talented cast. Another change from the average Sandler flick.

Very moving and touching but I do prefer Adam in more comedic rules.

So, did you like Adam Sandler's serious work in Punch-Drunk Love? You didn't see it/thought it was too similar to his comedic work with little drama? Well, how about Spanglish? You didn't see it/wanted to see him do it with a bigger role? If you answered the latter to one or both questions, and you haven't seen Reign Over Me... why are you reading this review? It can't be that you haven't heard about it. Well, if you haven't, here's a brief rundown of the story: dentist Alan Johnson (Don Cheadle, who needs to be a bigger name. Now) runs into his old college roommate Charlie Fineman (Adam Sandler who by now should convince people at large he can do serious work) , who seems distant and depressed in contrast to the man about town, happy-go-lucky man Alan knew of yesteryear. Alan later discovers that Charlie's family died in 9/11 and in those five years, Charlie's just withdrawn into himself and cut off ties with anyone who knew his wife and daughter. Both men spend time rekindling their friendship and searching within themselves and each other for what they need to overcome. Like I said, Don Cheadle is wonderful. His character is not just well played, he's sharply written. Anytime an uncomfortable situation comes up, like talking to his wife (Jada Pinkett Smith) about a woman, Melanie (Paula Newsome) trying to seduce him, he reacts in a calm and rational matter, no stuttering or violent rage. That's who he is, a peacekeeper. And he's under a lot of pressure. His marriage isn't all that it could be, due to lack of communication with his wife; Melanie is suing him for advances SHE made, due to her obsession with him; and when Charlie re-enters his life, it just hits him how much Charlie just seems to have given up on life. Speaking of Charlie, Adam Sandler plays this role similar to the one he played in Punch-Drunk Love only with more depression fueled rage as opposed to eccentric fueled rage. While that too is one of my favourite movies, I wouldn't disagree if someone said it was essentially Adam's man-child humor with a slight more serious focus. But it's here where his anger and blue mouth work best. Charlie's on a self destructive path, and lives in his own little world, because the real one is something he's not ready to re-embrace. He may seem self-involved but that's because by opening up to people and connecting with people, in particular those who knew his family, he leaves himself vulnerable to thinking of them again. This leads to a court case to determine whether or not he needs to be placed under someone else's care due to his lifestyle possibly endangering others and it is the most powerful sequence in the movie, no question. Charlie's family keep being brought up, with her parents right there in court, showing pictures of Charlie's wife and daughter and Charlie's about ready to burst. I couldn't help but be sucked into that, I'm on his side all the way. And on a smaller note, how awesome is Donald Sutherland? He only gets the court room scenes to act in but he acts the Hell out of them. Yes, he's made some crap but so have a lot of actors and I've forgiven them. One more thing about the courtroom scenes and why I like them: think of Big Daddy. Most times when an Adam Sandler character has to deliver the big dramatic speech, all the wacky cameo characters return to support the big moment even if his character is as thick is a brick-constructed building holding bricks (Billy Madison is a prime offender but gets off by being talked down to in such an epic manner). But all it is, after the jokes, is one big dramatic "look at me, I can be serious for a moment!" schtick. Dude, forget it, you made the whole thing a farce. But here, you're not laughing now. You want to leap to his defense and get him out of there as soon as possible. It really is a nice contrast to all these antics in previous Sandler films. It's funny a couple of times but after a while, it's time to retire the schtick. If you haven't seen anything I suggested at the beginning that could convince you Adam can blend his silly voices with confronting drama, go with this. Or Funny People. Either way, prepare to be amazed.

You can't fault this movie for having good intentions. It trys to present an honest and sincere portrait of how friendship can help heal some seriously deep wounds and resolve some problematic issues. This film should be commended for that, especially as it uses 9/11 as the source of this pain and grief. Once again, Sandler enters the world of drama, this time channeling Blonde on Blonde era Bob Dylan. He makes a terrific effort to pull of the incredibly difficult role of Charlie, a man who lost his wife, three children, and dog in one of the plane crashes on 9-11-2001, and has become so far removed from society he has shut out everyone connected to his loss. Sandler is mostly successful, but doesn't quite yet have the chops to pull it off perfectly. Regardless, I thought he did a really good job. Don Cheadle is also really good as Charlie's old college room mate who he reconnects with quite by accident. Alan really wants to help Charlie, and in trying to do so, learns to start coping with his own problems. Jada Pinkett Smith is decent, if underused. Liv Tyler is also good, but I would have liked to have seen more of her as well. Saffron Burrows steals a few scenes, and I understood the connection the filmmakers were trying to make between her character and Sandler's character, but they should have been more clear for those who may not have caught on. Despite these nitpicks, they aren't the biggest issue that keep the movie from being what it could and should have been. The tone is uneven, as is the pacing. The film also runs a tad too long. While I did enjoy this movie, I thought the story overall could have been handled better-especially the third act. Restructuring the film would really help in this department. So yeah, despite the problems plaguing this film, it is still very moving and entertaining, and I give it a mild recommendation. B-.

Reign Over Me Quotes