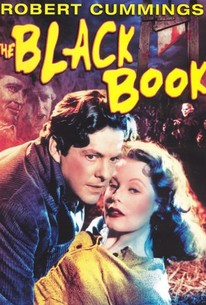 Also known as Reign of Terror, The Black Book is a bold effort by director Anthony Mann to film a French Revolution epic on a "B" detective picture budget. Robert Cummings stars as Charles D'Aubigny, who has been engaged by a group of political moderates to retrieve a little black book from Revolutionary leader Robespierre (Richard Basehart). The book allegedly contains evidence that Robespierre has been acting in his own interest rather than on behalf of the new government. D'Aubigny is compelled to deal with the tangible threat of Robespierre's chief henchman (Charles McGraw) as well as his uncertainty concerning the loyalties of those working with him. The Black Book is retrieved, but not before Robespierre has self-destructed on his own. The cheapness of The Black Book works in its favor, especially its overuse of shadows; while this photographic device was intended to disguise the seediness of the sets, it accurately conveys a "dark" period in French history that here is literally as well as figuratively dark. ~ Hal Erickson, Rovi

Critic Reviews for Reign of Terror

Mann's direction is quick and unpretentious. All period/costume movies should be this fun.

... the strangest of genre mixes, a costume crime thriller with a continental setting and an American pulp sensibility.

It's a French Revolutionary drama made like one of Mann's film noirs.

Noir visits the French Revolution, as the emphasis on vicious brutality suggests an account written by the Marquis de Sade.

Audience Reviews for Reign of Terror

a really odd genre mix from director anthony mann; it's a film noir set during the french revolution! the lead actor is weak imo but it's a decent thriller and worth watching for john alton's stunning b&w photography alone