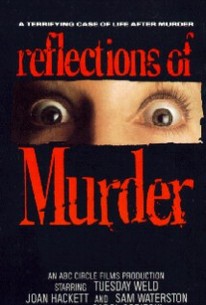 Reflections of Murder is an admitted remake of the 1955 French spinetingler Diabolique (we say "admitted" because most Diabolique rip-offs fail to credit the source). Joan Hackett is unhappily married to Sam Waterston. Tuesday Weld is Waterston's equally disenchanted mistress. Hackett and Weld conspire to murder the hateful Waterston, but he proves hard to kill. Even after he's breathed his last, Waterston steadfastly refuses to stay dead-and thus the stage is set for the twist- countertwist climax. Filmed at Puget Sound, Reflections of Murder was one of the last made-for-TV projects of director John Badham; it was first aired November 24, 1974.

Jesse Vint
as Cop on Freeway

Don Sparks
as Photographer
View All

Critic Reviews for Reflections of Murder

There are no critic reviews yet for Reflections of Murder. Keep checking Rotten Tomatoes for updates!

Audience Reviews for Reflections of Murder

Terrific remake for television of the french classic Diabolique. Well directed by Badham and blessed with two great actresses in Joan Hackett and Tuesday Weld this has a creepy atmosphere that enhances the overall feeling of dread that is so vital to making the film work. Obscure but worth seeking out.