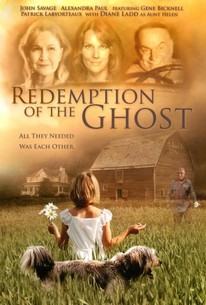 When an escaped convict is discovered hiding in a barn by two young children, he convinces the kids that he is a ghost while learning an important lesson in paying penance for his crimes. Witt Hampton was a convicted embezzler sentenced to year behind bars for his greedy transgressions. Eventually, Witt grows tired of prison life and stages a daring escape. Later, while seeking refuge in an old barn, Witt is discovered by two young boys. In order to avoid being sent back up the river, the frightened convict convinces the kids that he is actually a friendly ghost, and soon joins them on a series of fantastic adventures. Gradually, the once unrepentant criminal becomes inspired by the innocence of the children he has befriended, making a pledge to redeem himself before making the inevitable trip back to the big house.

Kellen DeRuy
as Pig Farmer No.2

Critic Reviews for Redemption of the Ghost

There are no critic reviews yet for Redemption of the Ghost. Keep checking Rotten Tomatoes for updates!

Audience Reviews for Redemption of the Ghost

19/08/2010 (TELEVISION) A very tricky story which is done in a way that was believable, in other words, its utter crap that was molded convincingly and worked! No complaints though cause I did make it to the end. Although when I stepped back and had a laugh it occurred to me that I shouldn't, because I really got into it and quite liked the flow as it progressed and I had myself quite attentive to the subject at hand. Definitely a morality flick that appeals to the sane and sensible, but I guess crazy people may watch, learn and catch on... maybe. Depends. On how much sanity they have left!

Redemption of the Ghost Quotes