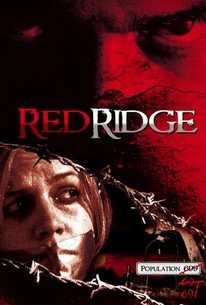 A gruesome thriller based on actual events, director Damien Skinner's Red Ridge tells the tale of a man who comes face to face with true evil while traveling through Texas to meet his estranged wife. Brandon Miller may not have kept his promise to stay sober, but he's determined to keep the promise he made to estranged wife Alicia to meet her at her cabin on the Texas-Mexico border. Upon taking a short cut though the remote town of Red Ridge, however, Brandon quickly becomes caught up in horrifying circumstances beyond his control. Alicia's sister Dawn and her boyfriend were also on their way to the cabin, and had previously attempted to take the same shortcut as Brandon. Unfortunately the traveling couple made the mistake of picking up a pair of sadistic hitchhikers named Lalo and Ness, two men with a serious torture fetish. When Brandon spots Dawn's car in Red Ridge, he suspects that something may be amiss and stops to look for her. Thus begins a terrifying journey into the darkest corners of the human psyche, a place from which few get out alive, and those who do will be forever changed.

There are no critic reviews yet for Red Ridge. Keep checking Rotten Tomatoes for updates!

There are no featured audience reviews yet. Click the link below to see what others say about Red Ridge!