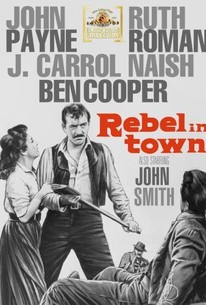 Rebel in Town was the third issue from Bel-Air Productions, a firm co-founded by film execs Howard W. Koch and Aubrey Schenck. While the title character is played by John Smith, top billing goes to John Payne as ex-Union officer John Willoughby. When Willoughby's young son (Bobby Clark) snaps his cap pistol at Confederate veteran Wesley Mason (John Smith), Wesley instinctively whirls around and shoots the boy dead. Despite the fact that he and his offspring are fugitive bank robbers, Wesley's father Bedloe Mason (J. Carroll Naish) insists that his son turn himself over to authorities. Instead, Wesley escapes, whereupon he is killed by the grief-stricken Willoughby. Though it hardly seems possible at this point, Willoughby's wife Nora (Ruth Roman) struggles valiantly to bring the crisis to a nonviolent resolution. ~ Hal Erickson, Rovi

Critic Reviews for Rebel in Town

Audience Reviews for Rebel in Town

There are no featured audience reviews yet. Click the link below to see what others say about Rebel in Town!