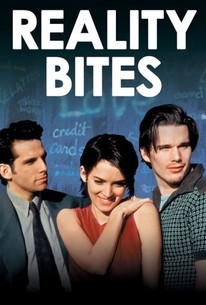 Critics Consensus: Reality Bites may be too slick to fulfill its promise as a profound statement on Generation X, but an appealing ensemble and romantic sizzle make for an entertaining dive into the ennui of youth.

Critics Consensus: Reality Bites may be too slick to fulfill its promise as a profound statement on Generation X, but an appealing ensemble and romantic sizzle make for an entertaining dive into the ennui of youth.

Critic Consensus: Reality Bites may be too slick to fulfill its promise as a profound statement on Generation X, but an appealing ensemble and romantic sizzle make for an entertaining dive into the ennui of youth.

Four recent graduates discover how difficult it is to find a decent job and true love after college.

Jeanne Tripplehorn
as uncredited
View All

A lot has changed between the generations, but Reality Bites asks a question that anyone, of any age, will find familiar: what happens when the life you were promised isn't the life you got?

In a picture full of painful moments, it's hard to decide on the lowest point.

Written with verve and played with grace, Reality Bites is too smart to pass itself off as a definitive statement, but it gets the details delightfully right.

Ryder and Hawke bring crucial authenticity to their roles with effortless appeal. You'll find yourself wanting more of these characters than the movie gives you.

However conventional Reality Bites resolves to be, it is always engaging. Best of all, Ryder has her greatest role since Heathers, once again proving herself a seriously funny young actress.

It's a good example of an anti-establishment comedy crippled by a seeming desire to infatuate the establishment itself. What Reality Bites needs most is a good bite. From reality.

The deeper themes of choosing art and integrity over earning a living . . . felt phony and hollow then, and are nothing short of embarrassing to watch from a modern perspective now.

Gone is the fearless savagery Stiller smuggled into his TV series. Stuck between slacker and attacker, he settles for something curiously inert, slavishly mainstream and so hopelessly phony its own characters might make fun of it between bong rips.

For all its faults, this still has moments of hip charm.

The screenplay by newcomer Helen Childress falls back on familiar formulas too often, but first-time director Ben Stiller keeps the action fast and involving even when you can't help guessing what the next story twist will be.

The smart script by 23-year-old newcomer Helen Childress doesn't lose sight of the characters and the issues that affect them and other young adults.

A movie I have seen several times over the years, including when it first came out at the cinema. While it's not perfect, and not an absolute favourite, I do enjoy it. Particularly Winona Ryder and Janeane Garofolo. Vicky, in particular was a very good character. I love her look and quirky personality. I do find Ethan Hawke's Troy an absolute twat, and that has only increased over the years. I can't believe he's the supposed hot guy you are meant to feel for. A womanising, chain smoking slacker. Mmm. Does it for me. Ben Stiller's character is a bit too yuppie to really cheer on, but he's preferable to Troy. Quite nostalgic 90's viewing and some good music on the soundtrack including Juliana Hatfield.

Troy Dyer: You can't navigate me. I may do mean things, and I may hurt you, and I may run away without your permission, and you may hate me forever, and I know that scares the living shit outta you 'cause you know I'm the only real thing you got.  "A Comedy About Love In The 90's" I didn't really know what I was getting myself into with Reality Bites, plot wise. I just saw that it was comedy directed by Ben Stiller, that had an excellent cast including: Winona Ryder, Ethan Hawke and Steve Zahn; and that was enough for me. I can't sit here and say that Reality Bites is as important a film as it seems everybody involved thought it was. Basically, it's a lot like Linklater's Suburbia. It's all about a quartet of friends getting out of college and realizing that the world may not actually be their oyster. The real world isn't the walk in the park they thought it would be. No, they will have to deal with people that are hard to work with. They will have to put up with shit, just so they can pay the rent. And they'll have to do it all by themselves. As a character in the movie says, "The world doesn't owe you any favors." I'm sure Stiller would love to think that this film is anything more than a romantic comedy, but at the heart, that's all it is. But don't be too bummed that your film didn't quite make it the extra mile you wanted it to, because you still have a highly enjoyable and pretty well made Romantic Dramedy.  Four friends are now out of college and living together. One works at the GAP, one works as a helping hand on a tv show, one is gay, and one is a genius, that is too smart to actually make a difference in the world. There's a lot of dialogue about their concerns on life, on what to do, and on who to love or how to love. The best part of this movie happens to be Ethan Hawke as Troy. This might possibly be the best performance I've ever seen from Hawke. He isn't one of my favorite actors out there, but I think he is a highly underrated actor. His character is one of the love interests of Winona Ryder's character. They've been friends for years, and could always talk to each other, but under the surface, there is something more between them. Overall, there's really nothing wrong with Reality Bites, except that maybe was trying to be more than it really is. But what it is, is good enough.

Not having seen this when it first came out and not having really lived through the early '90s, I still find this movie remarkably dated. Perhaps it's the grunge costumes or "The Real World"-esque yuppie ennui. There is some moving dialogue though: Troy: Besides, everyone dies all by himself. Michael: If you really believe that, who are you looking for out here?

Few films from the 90s portrayed the generation grunge and captured the spirit of that time as spot on as this and "Singles". Even today's kids should easily relate to the group of early Twens who dunno where to go with their lives after graduating from college. Their money, love and job issues are the center of attention here, like in everyone's life. Mixing the plot with video footage of our protagonist Lelaina interviewing her friends, there is a lot of random rambling, but with quite a few glimpses of congeniality. And, it always feels real. The film takes its characters and audience of the same age group seriously and knows exactly what's going on with them. Of course there is plenty of humor, but director Ben Stiller, long before his slapstick fame, keeps it realistic. The excellent soundtrack completes the picture and makes for an all around satisfying and true experience, even if it almost feels like from a different era already. The movie also foreshadowed the wave of reality TV that washed over us ever since.