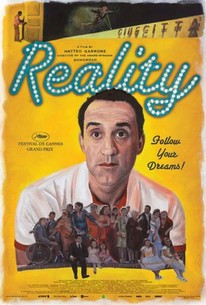 From acclaimed director Matteo Garrone, REALITY is a darkly comic look at Luciano, a charming and affable fishmonger whose unexpected and sudden obsession with being a contestant on the reality show "Big Brother" leads him down a rabbit hole of skewed perceptions and paranoia. So overcome by his dream of being on reality TV, Luciano's own reality begins to spiral out of control, making for one of the most compelling tragicomic character studies since Scorsese's The King of Comedy. (c) Oscilloscope

It's clear that Garrone is lamenting the death of culture. But the movie is more compassionate than screed-y. It's a portrait of the preoccupation with fame in an age in which in fame is cheap.

The satire here is finespun, and the film's conclusions ambiguous.

A dark allegorical comedy about the nature of fame, about obsession, about madness - and the point where they converge: on Big Brother, a TV show watched by millions.

For all its ups and downs and occasional detours into boorishness, it's an original that will surprise if not necessarily delight fans of Garrone's very different crime drama, "Gomorrah."

Matteo Garrone follows his crime epic Gomorrah with a comedy about reality TV, and though it hardly rivals the earlier movie in its social complexity, it still offers the spectacle of a vibrant and vividly realized Neapolitan neighborhood.

As cautionary tales go, this one's ripely knowing, and it speaks in a lot more languages than Italian.

Explores the pratfalls of celebrity with the unashamed extravagance and reckless abandon of reality TV and its many characters.

Reality can be as slow-moving as watching the 24-hour webcam in the Big Brother house. But the payoffs are greater.

... no one is going to walk away from it with any questions about what [director Matteo Garrone] thinks of reality TV. That makes the ending quite startling.... It's too bad the first 100 minutes couldn't have taken the same approach.

The parallels between religion and hollow TV celebrity addiction are belaboured in this overdrawn satire that ends up as an eloquently shot study of a deluded man's disintegration.

It's all very well done, with evocative character actors like those used by Fellini, and settings reminiscent of Vittorio De Sica's 1960s comedies.

In this echo chamber of fame-for-fame's-sake, real life imitates reel life. There's a lurid, Felliniesque sheen to Garrone's floating camerawork; this is reality tweaked, dialed up to 10.1. And there's a cheeky, sideways satire of Roman Catholicism.

Garrone uses many elegant long takes and an evocative score to tell this fascinating, dream-like character study about a common fishmonger who gradually becomes obsessed with the idea of being famous - leading him to mix his yearnings with reality.

A fishmonger from Naples loses his grip on reality as he waits to hear back from his audition for the Italian version of the "Big Brother" TV show. Slow but rich, with layers of satire and allegory and great long tracking shots of glorious Naples.