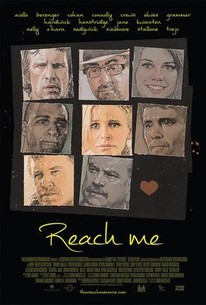 Critics Consensus: Featuring a bewildering array of talented actors pummeled by disjointed direction and a dull, hackneyed script, Reach Me is so fundamentally misbegotten that its title reads more like a threat.

Critics Consensus: Featuring a bewildering array of talented actors pummeled by disjointed direction and a dull, hackneyed script, Reach Me is so fundamentally misbegotten that its title reads more like a threat.

Critic Consensus: Featuring a bewildering array of talented actors pummeled by disjointed direction and a dull, hackneyed script, Reach Me is so fundamentally misbegotten that its title reads more like a threat.

Nicky Hawthorne
as Girl with Mace

Sky Young
as Kid in Store

Max Kleven
as Man in Bookstore

John Herzfeld
as The Director

Oleg Taktarov
as Man in Park

Glenn Keogh
as Max The Thug

Prince Shah
as Mechanic
View All

News & Interviews for Reach Me

View All Reach Me News

Critic Reviews for Reach Me

At times "Reach Me" is undeniably intriguing, mostly because it's just so weird and disconnected. Eventually, though, it just becomes tiresome.

Nothing in the proceedings is remotely convincing, let alone entertaining.

Once you've sunk into the entirely warped groove of "Reach Me" you're almost eager to experience the next offense against aesthetics and/or common sense it is poised to commit.

'Reach Me' is the sort of movie where careers go to die.

A kitchen-sink mess with no discernible narrative drive or thematic resonance beyond uninspired batches of bad behavior, gunplay, eccentricity and weak uplift.

Casting Sylvester Stallone as a gossip-site publisher obviously modeled on Matt Drudge is one of many counterintuitive ideas that backfire in "Reach Me."

It's 'Pulp Fiction' lite with blaxploitation aspects. Regardless, a movie about beating addictions, getting more out of life, and being a better person, is a good thing.

The jokes aren't funny and the earnest stabs at emotional sincerity ring false in this ensemble melodrama.

Herzfeld is determined to make these puzzle pieces fit, yet there isn't much to solve with Reach Me, which gradually limps to a cop-out close.

Reach Me feels lazy, in desperate need of its own motivational speech.

Reach Me takes a long list of cliches -- some more offensive than others -- and mixes them all together with a fancy cast to make a boring, pretentious film. Reach for an actual book instead.

Audience Reviews for Reach Me

For a film to have so many big stars this should of been better even though the plot didn't really make sense just a bunch of short stories all connected to a self help book it's easy to see why it went straight to dvd and holds a 4% rating on here, The ending was forced in and had no real connection to the film and was just boring.