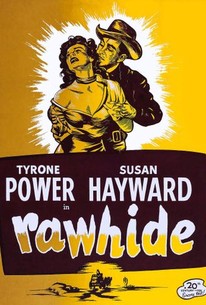 Rawhide is a westernized remake of the 1936 crime melodrama Show Them No Mercy. Tyrone Power stars as Tom Owens, the assistant manager of a remote stagecoach way station. A coach arrives, bearing Vinnie Holt (Susan Hayward), who carries her baby niece in her arms. Having learned that an outlaw gang is in the vicinity, Owens advises Vinnie to hold up at the station until the next day. Shortly thereafter, the gang arrives and kills stationmaster Sam Todd (Edgar Buchanan). Outlaw leader Zimmerman (Hugh Marlowe), assuming that Owens and Vinnie are the baby's parents, decides not to kill them as well but to hold them prisoner while he and his men await the arrival of a gold shipment. Tension mounts as the relatively civilized Zimmerman argues with his psychotic henchman Tevis (Jack Elam) over the fate of the "married couple." Meanwhile, Owens tries to think up an escape plan for himself, Vinnie and the child. The film closes with a nail-biting shootout, with the baby in the thick of the fray. So as to avoid confusion with the TV series of the same name, Rawhide was retitled Desperate Siege for its first television showing in 1962.

There are no featured audience reviews yet. Click the link below to see what others say about Rawhide!