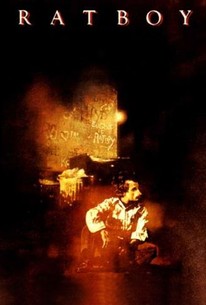 This drama follows an unlikely "ratboy" (S.L. Baird) after he is discovered living in a makeshift shelter in a garbage dump. Along comes Nikki Morrison (Sondra Locke, also the director) who meets the half-rodent, half-human creature and takes him over. She talks to a Hollywood producer and holds forth about him on a television talk show but when she brings ratboy to a press conference, he bolts for freedom -- enough is enough. The garbage dump was better. From that point onward, Nikki begins to change her mind about her treatment of the misbegotten creature and he develops an ambivalent feeling for her.

Courtney Gadny
as Kid in Car

Steve Bassett
as Reporters at Dump

Lloyd Nelson
as Reporters at Dump

Ratboy is a perplexing movie about a perplexing hero - a little creature that is half human and half rat and combines all of the least interesting characteristics of both species.

The film gestures at whimsy and heartbreak while making the broadest possible comments about Hollywood and how the machinery of fame grinds up the innocent.

You'd think Locke would have learned SOMETHING from Clint Eastwood.

Astonishing what you can do if you're Clint Eastwood's girlfriend.

Fuck this fucking movie. What the fuck. Why would someone waste money on this.