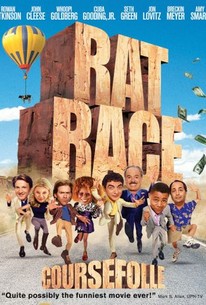 Critics Consensus: Rat Race moves from one sight gag to another, but only a handful of them are genuinely funny.

Critics Consensus: Rat Race moves from one sight gag to another, but only a handful of them are genuinely funny.

Critic Consensus: Rat Race moves from one sight gag to another, but only a handful of them are genuinely funny.

A very loose remake of the classic multi-star comedy It's a Mad Mad Mad Mad World (1963), this madcap comedy is directed by Jerry Zucker, one third of the Zucker-Abrahams-Zucker comedy team and director of Ghost (1990). John Cleese stars as an eccentric casino owner who devises a contest pitting six teams against each other in a race to claim two million dollars from a locker in New Mexico. The competitors are Owen (Cuba Gooding Jr., who ends up driving a bus full of Lucille Ball imitators, a foreigner (Rowan Atkinson) who hitches a ride in an organ donor vehicle, and a recently reunited mother and daughter (Whoopi Goldberg and Lanei Chapman) who anger a "squirrel lady" (Kathy Bates) -- much to their regret. There are also two con artist brothers (Seth Green and Vince Vieluf), the upright Nick (Breckin Meyer), who gets a lift from cute but psychotic pilot Tracy (Amy Smart), and the eccentric Pear family, headed up by Jon Lovitz. Rat Race also stars Dave Thomas, Kathy Najimy, Wayne Knight, Dean Cain, and Paul Rodriguez.

Douglas Haase
as Guy at Bar

Gloria Allred
as Herself

Renee Lee
as Witness in Crowd

Marcos Menendez
as Other Cabby

Daryl Sullivan
as Man in Line

Jake Bendel
as U Rent It Clerk

Kate Zucker
as Girl in Lobby

Bob Zucker
as Boy in Lobby

Gene Lebell
as Veteran with Gun

Tyler Gauthier
as Baby on Train

Matthew Gauthier
as Baby on Train

Mason Jones
as Feed the Earth Boy
View All

A few decent running gags ... and an ocean of bad ones.

Race, which delights in bashing all manner of transportation, hits its silly stride early and never shifts into a higher gear.

You'll laugh. You'll laugh so hard you cry. You'll hold you're sides from laughter. And then, you'll laugh some more. And after you've seen it once, you'll "race" back to the theater and see it twice just to make sure you get all of the jokes.

Vulgar and lowbrow, but very funny.

Manic, messy, and for the most part silly, this road comedy marks Zucker's bumpy return to the genre after a number of equally bumpy dramas such as First Knight.

... the only real surprise is how genuinely dreadful a movie that aims only for pleasant, profitable mediocrity can be.

I love this movie and i always have! It has a star studded cast and maybe not the most complicated or even much to the storyline, but still very much enjoyable! Its funny, really funny with some really funny characters that you cant help but fall in love with! Some of the best comedic scenes i have to say were from Jon Lovitz and his family they were great! Funny and worth the watch!

Rat Race is a good enough that has enough effective comedic moments to make this a film worth watching. For a remake, this film wasn't too bad, but it wasn't great either. The film has good comedy and a good cast to support the film. The film is very funny, but could have been better as well. The jokes are good, but don't hold up after multiple viewings. Watching this film again, I didn't think it was as funny as the first time I saw it, however it still is good fun and funny, but this is the type of which the jokes lose their vigor. They're still good, but lack at times. If you're looking for an entertaining, fun comedy, this is one worth watching. There's plenty to enjoy, and with a cast like this, they make an ordinary film pretty memorable. The film is enjoyable for what it is, and it has a lot of funny moments here and there. The most memorable performances are Seth Green and Jon Lovitz. Those two actors stole the show. Rat Race is lots of fun from start to finish. There's lots to enjoy about this and if you want a mindless comedic romp, then this is a great film to watch. I very much enjoyed the film, and thought for the most part it was a wonderfully funny comedy with minor flaws. For a remake, this is a pretty good one, better than most and is worth your time. Not a comedy classic by all means, this film still has enough good elements to create an effective film that is entertaining.

I think because Jerry Zucker's other films Airpane and The Naked Gun didn't really have any genuinely good actors and just got straight to the gags "formula" was the reason people were dissapointed with Rat Race. It didn't stick to it and instead used real actors. I however see this as an advantage. Because they were funny. The whole movie is similar to Airplane! because it seems to be like a series of sketches. Most of them being very, very funny. Even though there was one or two jokes I didnt laugh at, the performances of the great ensemble cast made me grin. Rat Race is ambitious to make you laugh without resorting to mean humour like The Naked Gun or Airplane. It suceeds in doing this, as it's in my opinion: possibly one of the best sight comedy films of all time.