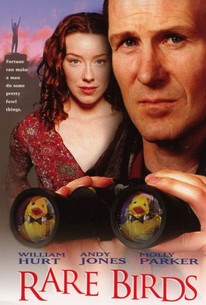 Iceland-born Canadian filmmaker Sturla Gunnarsson spins this offbeat comedy about fine food and feathered friends. The owner of a failing gourmet eatery in a small Newfoundland town, Dave Purcell (William Hurt) is about to throw in the towel. As he raids his wine cellar and nurses his sorrows, his wacky friend Alphonse Murphy (Andy Jones) hatches a scheme to save the restaurant. They announce a faked sighting of a rare bird in the restaurant's vicinity, and soon bird watchers and even celebrities are pouring into the establishment. Dave's restaurant is so busy, in fact, that he hires Alphonse's shapely sister-in-law, Alice (Molly Parker), and in less time than it takes to burn a soufflé, romantic sparks are flying between the two. Unfortunately, Alphonse's schemes aren't limited to ornithological fraud. He has some hackneyed plan involving a submarine and a pile of cocaine that could bring down all that Dave has built. This film was screened at the 2001 Toronto Film Festival.

Barry Newhook
as Caller No. 1

Laura Tobin
as Girl No. 1

Maggie Meyer
as Girl No. 2

Deidre Gillard-Rowlings
as Waitress
View All

Rendered bland and frustrating by its endless attempts to make the odd odder.

The movie keeps coming back to the achingly unfunny Phonce and his several silly subplots.

With Rare Birds, as with The Shipping News before it, an attempt is made to transplant a Hollywood star into Newfoundland's wild soil -- and The Rock once again resists the intrusion.

Even if you don't know a wren from a grackle, there are pleasures here.

Has all the right elements but completely fails to gel together.

Rare Birds has more than enough charm to make it memorable.

Rare Birds ain't perfect ... but the wild performance by Jones constantly turns the movie upon its head.

A quirky comedy set in Newfoundland that cleverly captures the dry wit that's so prevalent on The Rock.

Cute little film set in a sleepy Newfoundland town that is set upon by outsiders all in searchof an elusive bird. Touching with good character interaction.

Shot in beautiful Newfoundland by Icelandic director Sturla Gunnarsson. Based on the novel by Canadian Edward Riche, who also wrote the screenplay. Stars Molly Parker, a wonderful Canadian actress.