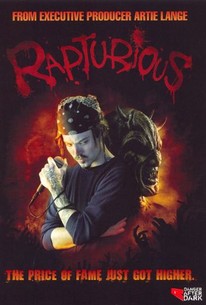 When an up-and-coming hip-hop star named Rapturious receives a special delivery from his well-stocked dealer, the hellish hallucinations he experiences make him wonder if he hasn't gone completely insane in writer/director Kamal Ahmed's mind-bending horror film. Rapturious (Robert Oppel) may have big talent, but his self-destructive drug habit has recently threatened to sideline any chance of real success. One day, Rapturious's dealer Louis (Hoya Guerra) slips his loyal customer a new drug that he promises will deliver the ultimate high. Intrigued, Rapturious eagerly takes the drug and quickly begins experiencing a series of profoundly disturbing hallucinations. Rapturious's manager Sid (Debbie Rochon) always knew that the rapper was a bit unstable, but when he begins claiming to see demons that are hungering for his immortal soul, she rightly begins to fear that he has finally fallen off the deep end. As his murderous visions get increasingly vivid, Rapturious begins to wonder if he is actually committing the atrocities that he sees unfolding before his drug-addled eyes.

There are no critic reviews yet for Rapturious. Keep checking Rotten Tomatoes for updates!

There are no featured reviews for Rapturious at this time.