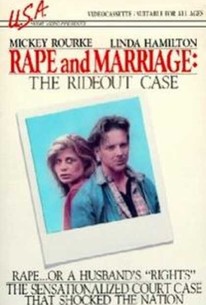 The landmark 1978 courtroom prosecution which determined that a married man can by law be brought up on charges of raping his wife, was meticulously--and tastefully--detailed in this made-for-TV movie. Linda Hamilton stars as Oregon housewife Greta Rideout, who after years of abuse at the hands her husband John (Mickey Rourke) (it is the sort of marriage described by one observer as "usually [winding] up as suicide or homicide") finally takes him to court, accusing him of forcing her to have sex against her will. Among those involved in the case are feminist activists Helen (Conchata Ferrell) and Jean (Gail Strickland) and opposing attorneys Gary Gortmaker (Eugene Roche) and Charles Burt (Rip Torn). Rape and Marriage: The Rideout Case originally aired October 30, 1980 on CBS.

Critic Reviews for Rape And Marriage: The Rideout Case

There are no critic reviews yet for Rape And Marriage: The Rideout Case. Keep checking Rotten Tomatoes for updates!

There are no featured reviews for Rape And Marriage: The Rideout Case at this time.