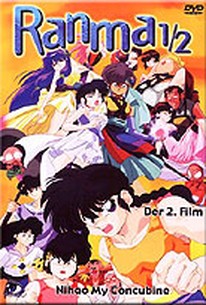 This animated comedy adventure is the second feature-length film based on the Japanese television series, Ranma 1/2. Ranma, the teenager who turns into a girl whenever he is doused in cold water and back into a boy whenever he is doused in hot water, is shipwrecked with his friends on a tropical island. A mysterious prince abducts the girls of the group one by one. Ranma must save the girls from the prince, who wants one of the girls for himself and the rest for his henchmen. ~ Jonathan E. Laxamana, Rovi

There are no critic reviews yet for Ranma 1/2: Kessen Tôgenkyô! Hanayome o torimodose!! (Nihao My Concubine). Keep checking Rotten Tomatoes for updates!

On a vacation funded by Kuno, Ranma and friends travelled to a remote island but the girls began to go missing. A self proclaimed native king of the island is looking for a bride and Akane might just be the perfect candidate. Short but compacted, each character had a few scenes to show off their talents but otherwise a bit corny and not very funny at all.

This sequel Ranma 1/2 anime is so hilarious with cool martial arts where Ranma and Co. are shipwrecked on a small island.