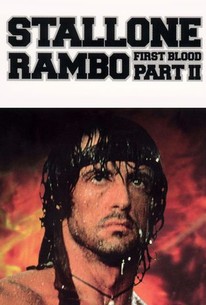 As Rambo (Sylvester Stallone) takes off for the second time to save U.S. POWs and fight at least two armies nearly single-handedly, he may not fly as convincingly as in his first, 1982 appearance, but he certainly lands as a buzz-word for the super-human macho hero. Stallone Rambos his way out of a prison camp with the help of his old Green Beret buddy Trautman (Richard Crenna), who arrives to free him for more active duty. It seems the U.S. government wants him to liberate those POWs - but does it? Rambo's ire reaches explosive levels when it turns out that the whole mission is PR for the American public. Fueled by fury, he rounds up the POWs and the action reaches its own explosive levels as he and a Vietnamese sidekick (Julia Nickson) fend off opposing forces and shepherd the POWs out of Vietnam. Wow.

George Cheung
as Tay
View All

So powerful and intoxicating is this kind of movie hero that when we see him operating in a flaw-riddled movie like ''Rambo'' we realize that heroic action can override almost any script.

In credibility, the action is as ludicrous as old Saturday-afternoon serials; in execution, the skills help it to skate over the incredibilities.

This overwrought sequel to the popular First Blood (1982) is one mounting fireball.

A thoroughly unpleasant project, quite apart from its creepy populist posturing (Stallone seemed determined to become the Huey Long of the movies).

The body count is rising, Sly's pecs are blowing up, and Rambo himself is becoming more of a brand-name than a character, a mascot for masochism and murderous self-assertion.

To anyone who doesn't share the camera's adoration, this sort of behavior becomes so comic that Rambo turns into something of a camp classic.

From its whip 'em up music to its doggy cliches, the movie is a rubbish pile. Even the vaunted action scenes... don't show fresh verve or tactical flair. They're just stunts with big price tags.

Stallone, an often terribly misused actor, embroiders a very physical role, very demanding, emanating fear and pain at the same time, something more difficult to do than it seems. [Full Review in Spanish]

The result is entertaining if implausible as Stallone flexes his muscles for some cartoon-like heroics, rescuing American prisoners in Vietnam but discovering that he's considered as expendable as the men he's trying to save.

Reappraisal is not due.

Despite its various issues there's one thing about Rambo: First Blood Part II that trumps everything else - it's a whole lotta fun.

I love this sequel, and I don't say that often. Rambo is such an interesting action film character, and we get to know more about him now with this film. You must see it if you're a fan of the first. The story brings him into a much bigger situation as the first, the stakes are upped, and there are really extreme action sequences. Being put back into a warlike setting really suits this character well. We get to see all of his talents. And don't be afraid, this story isn't just action with no story. You can read the story here on the site. It's a rescue with revenge and love and anti-communism, all the great themes of the 80s. And I don't want to give away the end, but it is both sad and satisfying to the audience. I loved this movie.

Far less dramatic than the first one, and with a level of subtlety so low it almost doesn't exist, but this film still has a good amount of heart to it...it's just buried underneath a massive pile of bodies killed in a ridiculously over the top fashion. Even thought the film is light on character development, and strove to be more of a pure action film (one of the most influential and parodied in fact), it is still entertaining, even though it's really just ok, and not all that good (unbelievable and unrealistic action aside). That's a shame too, because there could have been a lot of potential here for something on par with, if not better than the first. Shades of this can be seen throughout, and you can tell they had ideas for that sort of thing, but somewhere down the line something happened and they just instead went for the angle they did. Like I said, it's not really that good, but it is entertaining, and tries to somewhat build on things, even though it mostly relies on silly machismo and mayhem.

I really did not care about anything that happened during this film, the script is bland and the story is just an excuse to put John Rambo in another action film. Sure, some of the action scenes are very impressive and had my jaw open, but good action doesn't suffice when I cringe at the dialogue and the over-the-top acting. This film had so many things going for it, because the first film was so great. I feel like the director of this film was full of himself in thinking that any script for a Rambo film would be good. Throughout the film we get a bit more development of John's character, but it was done perfectly in the first film that it just felt unnecessary here. This film really didn't need to be made, but since it exists I watched it for what it was and had a fun time; However, I will probably not be revisiting this one much.

Sequel to the awesome First Blood, First Blood Part II revolves around John Rambo is sent into Vietnam to take pictures of a supposed abandoned POW camp. When he finds that the camp is still operational, he liberates a POW and subsequently gets betrayed by the men who hired him to get the job done. After this, he takes matters into his own hands and takes on half the Vietnamese army and a squad of Russian troops and attempts to rescue the other POWS's. First Blood Part II follows the events of the first film and the mission that Rambo goes on is a chance for him to get pardonned over the events of the first. First Blood Part II is a solid sequel that offers everything you'd expect from a Rambo film. Sure some aspects of the film are silly, but the key words you need to remember is ÈRambo Film' ehen this is a Rambo film, you should expect something over the top. The film delivers the usual top notch action thrills with decent acting, but as usual it's not anything great. But what do you expect in the acting department of a Rambo flick. Though lacking in some aspects of the picture, the film more than makes up for it with it's action. Thats the reason why Rambo films are excellent, the nonstop action. The filmmakers know how to craft a solid actioner, even at times if it's not truly perfect, there are a lot of things going for this film that surpasses the low points. As far as action films are concerned, First Blood Part II delivers everything you'd expect and more. First Blood Part II is an underrated film that doesn't deserve the flack it has received. Sure it's totally different, but theres an interesting plot to keep you entertained. Even if the plot is average, the action is flawless and its what makes this film a blast to watch again and again.