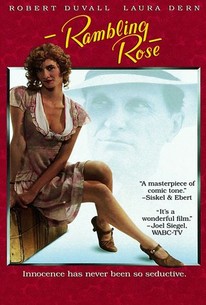 Rambling Rose is the most part a flashback, related by grown-up Southerner Buddy Hillyer (John Heard). The bulk of the film takes place in 1935, when rambunctious backwoods housekeeper Rose (Laura Dern) virtually invades the Hillyer household. Daddy Hillyer (Robert Duvall), a bed-rock Southern gentleman, welcomes the congenitally amoral but basically goodhearted Rose into his house, carefully fending off her ill-timed romantic advances. But Rose can't help feeling smitten with him; meanwhile, she has also drawn the attentions of 13-year-old Buddy (Lukas Haas). Based on the novel by screenwriter Calder Willingham, Rambling Rose was not the box-office breakthrough that many expected for director Martha Coolidge; though it fizzled financially, the film did manage to secure Oscar nominations for both Dern and her real-life mother Diane Ladd.

Michael Mott
as Man in Store

Jeffrey Smith
as Stand-In
View All

The intimate rhythms these two superb actors work up together capture a lifetime of marriage. Duvall and Ladd are the true heart and soul of Rambling Rose.

Willingham, who also scripted Paths of Glory, Little Big Man and The Graduate, wrote Rose in the early 1970s. Thanks to these sterling performances almost two decades later, his screenplay enjoys a fresh and tender blossoming.

The movie is all character and situation, and contains some of the best performances of the year, especially in the ensemble acting of the four main characters.

Seen in a flashback through the eyes of an adolescent, this uncommon coming-of-age tale, which raises poignant questions about the mysteries of sex and love, flaunts a superb performance from Laura Dern as the promiscuous girl

A quirky, funny but moving story with terrific performances all around.

Probes the mixture of fear and awe many men experience when they meet the life-force of women.

A modest but pleasingly adult entertainment at a time when even the most promising American films ultimately revert to Pollyannaish platitudes.

So much here is rich and touching, not to mention the string of superb performances, that the film still merits a recommendation.

Truly extraordinary performances, the familiar yet rarely predictable script and the fertile subtext that looks at sexuality and desire through feminist question marks, makes 'Rambling Rose' one of the year's most touching and absorbing movie experiences.

A touching, humorous and enjoyable film.

Dern is great. However, the movie attempts to be a straightforward character study but that is undermined by it's consistent tone problems.

Rambling Rose is the definitive Laura Dern performance. I particularly like mother-daughter performances as there is often additional sizzle to fictional work and Dern and Diane Ladd don't disappoint.

This unusual coming-of-age movie is charming, warm, witty and full of delightful surprise about a naive but sexually uninhibited girl arrives in an old-fashioned Southern household and soon has all the men in the family, indeed in the town, in a tizzy.