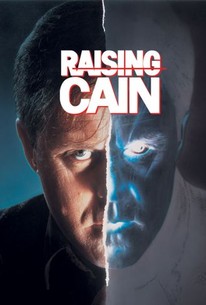 A complicated thriller, directed with great visual style by Brian De Palma, Raising Cain is the story of twin brothers, Carter and Josh (John Lithgow), one good and one evil, who will stop at nothing to find children to further their father's psychological experiments. John Lithgow is outstanding in the role of the brothers. Lolita Davidovich, is also good as his wife Jenny, who he may or may not have murdered. To even identify the other characters would give away too much of the complicated plot, which twists and turns, leaving the audience constantly guessing who is really who. The film is darkly comic and De Palma and his unusual plot devices play homage to Alfred Hitchcock, along with Orson Welles and Michael Powell's Peeping Tom.

"Raising Cain" is one for the books-a thrilling, funny, exciting and creepy exercise in suspense and humor from a master filmmaker firing on all cylinders.

That's the stuff of scary melodrama, especially with children in jeopardy. Unfortunately, DePalma fails to deliver real fright or titillation to his target audience, instead opting for satire.

Lithgow is consistently brilliant, while Davidovich makes a good fist as his wife. A really exciting 90 minutes worth, so long as you don't take it too seriously.

Still, the failure to go beyond implication blunts the movie's power and leaves De Palma stranded. As a result, the film becomes merely a scary prank. It's as if he forgot why he was making the movie in the first place.

De Palma always winds up letting his worst instincts get the better of him.

It's a diabolical idea taken to deliriously absurd extremes by De Palma.

While film fans might enjoy DePalma's stylistic homages to Hitchcock, and John Lithgow's total commitment to concept and character, there is little else to recommend about Raising Cain.

De Palma blurs the line between fantasy and reality with gleeful affrontery, creating a dazzling tapestry of visual cheats and narrative trickery which propels his scarcely credible characters and ludicrous plot through to its nervy conclusion.

Movies don't get much more De Palma than 'Raising Cain,' and in its new and improved form, it can finally get the praise it deserves.

An off-center carbon copy of De Palma's superb 1980 hit Dressed to Kill, coming off as hokey and jokey rather than clever and suspenseful.

works superbly in its isolated setpieces, even as the film as a whole doesn't quite hang together

While not quite as crazy it's main character(s), Raising Cain has some pretty nuts twists and turns. Not DePalma's best, but far from his worst too.

A misunderstood movie that is almost as bizarre and comical in nature as Body Double. Brian De Palmaâ€™s style really shines here, due to the fact that he plays perfectly with insanity. His shots make sense more than they do in some of his other work. To make this what it is though, it wouldnâ€™t be complete without someone like John Lithgow. He gives such a scarily funny performance(s) as a man gone crazy in four different ways. The plot is very much a homage to Psycho, but even more on the edge of insanity. Whether itâ€™s kidnapping babies or dressing like Margot, Carter is quite the multiple personalities victim. I would only suggest watching it if you get Brian De Palmaâ€™s style, otherwise you will be completely lost and write it off as silly.

Very good, once I could figure out what was going on!

This thrillers' content is very disturbing, so not for the faint-hearted. An evil Dr performs strange experiments on children.