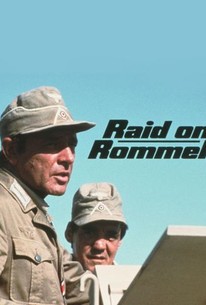 The British fleet is enroute to North Africa to engage the Germans, and the best port for them to use is Tobruk. There, they have problems: Germans occupy Tobruk, and have fortified it with devastating heavy artillery which would prevent a British landing. The original scheme for sabotaging the guns, by using British commandos planted behind the lines as prisoners of war, has gone awry. Posing as a Nazi officer, the man who was to lead the attack (Richard Burton) arrives at the rendezvous point, but all he finds are genuine prisoners of war, all of them sick, accompanied by their medics who are pacifists. A great many British lives hang in the balance, and a failure here could affect the outcome of the entire Second World War. Somehow, he must make use of these unlikely recruits to carry out the raid.

Critic Reviews for Raid on Rommel

It's a terribly complicated and not very interesting plot.

A rubbish film of the post-consumer recycled variety.

Audience Reviews for Raid on Rommel

There are no featured audience reviews yet. Click the link below to see what others say about Raid on Rommel!