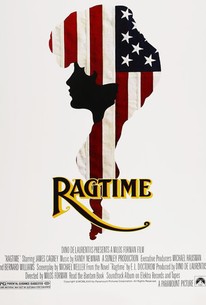 Milos Foreman's cinematic adaptation of E.L. Doctrow's sprawling pop-culture epic Ragtime follows a variety of characters whose lives intertwine during the earliest years of the 20th century. Brad Dourif plays the meek young brother in a wealthy family who ends up helping Coalhouse Walker Jr. (Howard E. Rollins) when the proud black man stands up to the racism that surrounds him with a criminal act that leads to a standoff with a police commissioner (James Cagney - making his return to the big screen after fifteen years away). Secondary characters include a street artist (Mandy Patinkin) who gets his foot in the door of the nascent film business, and a flighty young woman (Elizabeth McGovern) who inspires men who desire her to violence. Randy Newman composed the score, which included a song that earned him his first Oscar nomination.

Frankie Faison
as Gang Member No. 1

Hal Galili
as Police Captain No. 1

Richard Griffiths
as Delmas Assistant No. 1

Calvin Levels
as Gang Member No. 3

Christopher Malcolm
as Police Captain No. 2

Zack Norman
as Gent No. 2 - Manager

Dorsey Wright
as Gang Member No. 4

Robert Arden
as Foreman of the Jury

John Clarkson
as Plainclothes Detective No. 1

Ray Hassett
as Policeman No. 12

Robert Hitt
as Plainclothes Detective No. 2

Bill Reimbold
as Gent No. 3 - Lawyer

Nelly Polissky
as Woman in Window

Ed Wiley
as Conductor
View All

The great achievement of Ragtime is in its performances, especially Howard E. Rollins, Jr. and the changes he goes through in this story.

A most enjoyable and sometimes splendid movie, which blends its artistic and social concerns with assurance, ingenuity and an unfaltering sense of rhythm.

The main attraction of this movie is its ability to surprise the public. [Full Review in Spanish]

Sporadically engaging, Milos Forman's chronicle of American society and culture in the beginning of the twentieth century is too sprawling and dramatically diffuse, though some of the acting is excellent.

a jumbled and largely uninteresting mess

A robust screen adaptation of Doctorow's novel about class warfare, social change, and the gap between the rich and the poor

Doctorow's novel is a tricky thing to adapt, especially with its deliberately elusive ideas about America. Inevitably a lot of materiel was cut or truncated in this movie but there is a lot to admire in Forman's vision here. His focus on the characters inspires a lot of empathy, more than usual in these kinds of period pieces.

It drags here and there but mostly a fine epic film