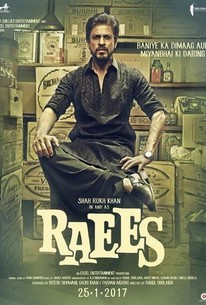 RAEES is the fictitious story of a man named Raees, set in early 1980's to 1990's Gujarat, India. The film explores how Raees' relationships and meteoric rise helped him build an entire empire from scratch, to make him the single most powerful man in the state. Less of a gangster but more of an impresario, Raees gains popularity, a cult following and most importantly the public's trust by demonstrating entrepreneurial flair, unfettered determination to achieving his goals and ironically a heart of gold. His layered character traits encapsulate an inimitable blend of personas, making him revered, loved and feared. Always thinking ahead of the curve and using revolutionary ideas of management which were unheard of during his time, but are now doctrines for students, Raees eliminates every opposition that comes his way. However, his downfall will be crossing paths with the no-nonsense police officer Majumdar, whose sole reason for existence is the elimination of crime. What ensues next is a tumultuous battle between the two, which forms a key defining element of the film's narrative.

[Raees] is a fiery slice of Bollywood action.

Avoiding flabby subplots, Mr. Dholakia keeps "Raees" taut and suspenseful, even at two and a half hours, though it probably has a song too many.

You'd think a role like this one lends itself to bravery and riskiness, but this is probably the safest risk ever taken.

The movie is an unabashed commercial entertainer. You go in for the awesomesauce Raees-Majmudar war, which is full of decadent Bollywood masala. If you are into that kinda thing, you will regret missing this one.

Shah Rukh Khan has never looked better; he's full of fury and for once, isn't spreading his arms, but breaking others'. The film lies entirely on his shoulders and he carries the weight most of the time.

Nihit Bhave
The Times of India

Raees is a sporadically fun, but frequently tedious attempt to reinvigorate the style of films that made Bollywood in the '80s an exciting place to be.

SRK's bravado dialogue delivery has some great stand out moments.

The beauty is in the detailing, even if the big picture is banal.

The problem is fundamental: the writing is shoddy and unoriginal. And by the time it wades into certain true events, it is left with too little time and meaning. Raees perhaps works only as an SRK showcase. But we've seen many of those already.

The film is set up so that the superstar shines -- except that he doesn't.

This is an uneven film. In places, you will applaud and whistle. But you might also find yourself utterly exhausted.

There are no featured audience reviews yet. Click the link below to see what others say about Raees!