Racing With the Moon1984 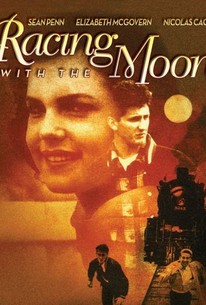 Racing With the Moon Photos

Sean Penn graduated to full stardom with the 1984 drama Racing with the Moon, even though the film itself hardly set new box office records. Set in the early years of World War II, the film stars Penn as a small-town teen-aged hotshot, six weeks away from being shipped out to fight overseas. In the meantime, Penn begins to date Elizabeth McGovern, whom he assumes is from a wealthy family. Penn's pal Nicolas Cage, who's gotten his girlfriend Suzanne Adkinson pregnant, imposes upon Penn to hit up McGovern for the abortion money. That's when Penn discovers that the girl barely has a penny to her name. Convinced that Penn cared for her only when he thought she was rich, McGovern walks out on him, but later teams up with Penn to help the unfortunate Adkinson. The plot is pure James Dean, a fact not lost on fans who regarded Sean Penn as the second coming of Dean. A very slight piece, Racing With the Moon is buoyed by the engaging performances of the stars, and by director Richard Benjamin's meticulous attention to period detail-especially in those peerless bowling-alley and skating-rink sequences.

Dominic Nardini
as Soldier with Annie

Dominick Nardini
as Soldier with Annie

Carol Kane
as Annie
View All

Critic Reviews for Racing With the Moon

Very little seems to happen in this social vacuum, and none of it is memorable.

It's easy to end a movie with 'I love you,' but it's hard to get there honestly.

An exceptionally appealing movie about subjects you may think you've already had enough of -- growing up, first love and the shouldering of arms and other responsibilities.

I don't care for Benjamin's way of using death to validate his sentimental themes, but at this point any American movie that can get past the 'I love you's without audience snickers has to be counted a success.

Everyone tries hard, but the movie is essentially superficial and has difficulty sustaining audience interest.

A sentimental view of small-town life in WWII, in which the railroads and train station are just as important as the human characters.

A small movie about first love with abundant emotional riches.

Audience Reviews for Racing With the Moon

I need to watch this movie again, I barely remember it.

A personal favorite. Now, this is a movie I don't mind seeing every now and then.

Racing With the Moon Quotes