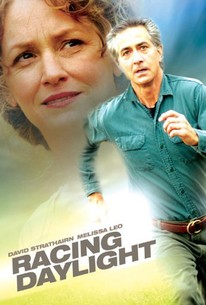 David Strathairn and Melissa Leo star in first-time feature filmmaker Nicole Quinn's Racing Daylight, a feature length love story told in three short films about hope and forgiveness. Part ghost story, part murder mystery, and part time-shifting tale of eternal love, the film follows the journey of Sadie Stokes (Leo), who has recently returned to her family farm in Cedersville to tend to her catatonic grandmother (Leclanche Durand). For as far back as anyone can remember, there have always been Stokes in Cedersville, though the family legacy appears to be fading as Sadie and Grandma are the last surviving members of their bloodline. One day, Sadie's staid existence is suddenly shattered when a mysterious man appears to her momentarily in a mirror, calling out the name "Anna" before vanishing back into the glass. Haunted by the mysterious apparition, Sadie gradually begins to take on the characteristics of her ancestor Anna Stokes while realizing that the only man capable of satisfying both herself and the apparition is Henry (Strathairn), the local handyman, and an avid Civil War enthusiast. But Sadie can't help but suspecting that Henry is in fact her long lost love Harry (Strathairn), and against the backdrop of the magical Hudson River Valley, an age-old mystery begins to take form in the present.

There are no critic reviews yet for Racing Daylight. Keep checking Rotten Tomatoes for updates!

There are no featured reviews for Racing Daylight at this time.