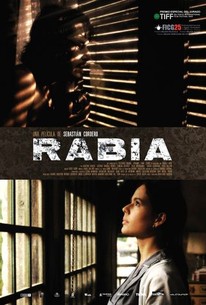 Based on a novel by Sergio Bizzio, Rage (Rabia) tells the suspenseful story of a pair of Latin American immigrants who fall in love. José María, a hot-headed builder, and Rosa, a housekeeper, embark in a passionate relationship. When a violent confrontation with José María's foreman results in the other man's death, José María flees to the mansion where Rosa works, telling no one. Hidden even from her, he watches Rosa be mistreated by her boss as he yearns for the day they can be together. -- (C) Strand

This may be the first film ever made about the seething rage of the disenfranchised that succeeds in lulling you to sleep.

Had the curtain come down 10 minutes sooner, it would have done so with a satisfying thump instead of a soggy swish.

The structuring allegory's invocation of familial bonds and immigrant burdens grows stilted: It doesn't collapse this delicate film, but it can't quite hold it up, either.

A ghost story for the 21st century, a fine genre film with a truly original and surprising concept.

This unnecessarily grim study of immigrants suffers from a deadly pace and an even more deadly creeping pretentiousness.

If you haven't got anything new to say, at least find an interesting way to say it.

Stellar gothic thriller from Spain about two Colombian immigrants who fall in love, only to find themselves torn apart by a ghastly rage-induced crime of passion is a ghost story without ghosts. Great atmosphere and haunting execution take an unlikely scenario and make it work, although the ending is a bit of a letdown.