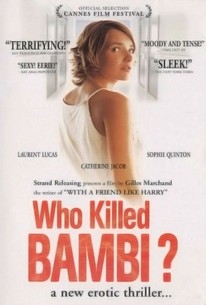 Critics Consensus: Who Killed Bambi? squanders its suspenseful setup on a clunky and contrived thriller populated by poorly written characters.

Critics Consensus: Who Killed Bambi? squanders its suspenseful setup on a clunky and contrived thriller populated by poorly written characters.

Critic Consensus: Who Killed Bambi? squanders its suspenseful setup on a clunky and contrived thriller populated by poorly written characters.

Gilles Marchand, who co-wrote the scripts for Human Resources and With a Friend Like Harry..., makes his directorial debut with Who Killed Bambi?, which he co-wrote with Vincent Dietschy. Isabelle (Sophie Quinton) is a student nurse. One night while leaving the hospital, she hears a ringing in her ear and loses her balance, passing out. When she awakens, the handsome young Dr. Philipp (Laurent Lucas of With a Friend Like Harry...) is standing over her. Amused by the young woman's seeming inability to stand on her own feet, he nicknames her "Bambi." Isabelle is not amused. Their relationship becomes adversarial when Isabelle notices that someone has been diluting the hospital's supply of general anesthetic. She suspects that the doctor is drugging female patients so that he can have sex with them. Before long, it's not just medicine, but patients who are going missing. Isabelle's boyfriend, Sami (Yasmine Belmadi), an intern, begins to think that she's having an affair with Dr. Philipp, and no one believes her accusations, not even her cousin, Véronique (Catherine Jacob), a more experienced nurse. Isabelle finds herself in danger, and her recurring fainting spells create a situation in which she may soon find herself on Dr. Philipp's operating table. Who Killed Bambi? was shown at the 2003 Cannes Film Festival and at the Walter Reade Theater in New York as part of the Film Society of Lincoln Center's 2004 Rendez-Vous With French Cinema.

Critic Reviews for Qui a tué Bambi? (Who Killed Bambi?)

Who Killed Bambi? does for doctors what Psycho did for showers.

A long and uneventful snooze.

Marchand capably builds suspense, thanks to a twisty script and nervy performances by Lucas and Quinton.

So skillful at sustaining a chilly antiseptic atmosphere in which death stalks every gleaming corridor that it comes as a sharp disappointment to find its hygienic imagery wasted on a clunking cat-and-mouse game.

A sustained atmosphere of bleached-out horror.

The melodrama acts as an anaesthetic, as it's hard to stay awake while it operates merely as a gruesome style over substance film.

A sleek and cool thriller that never quite boils over into all-out suspense, which feels enticing but also a bit dull and overlong.

Its lack of sense is exceeded only by the absence of chills.

Who Killed Bambi? is fun to watch, and newcomer Quinton has big, beautiful eyes, but the movie's contrived plot, forced conclusion and sentimental denouement rob it of real suspense and meaning.

you eventually get that it's supposed to be suspenseful, but it's ... near impossible to actually feel it.

The forced parallel with the Disney classic proves silly and pretentious, but the dull characters and lethal plot contrivances are what really do Bambi in.

Audience Reviews for Qui a tué Bambi? (Who Killed Bambi?)

A quiet, sleek but undeniably dry French thriller. There's plenty of potential here, but a ton of the plot just feels like dead air and almost none of the movie is memorable. The cinematography is unexceptional, none of the performances stand out and the characters are uninspired.