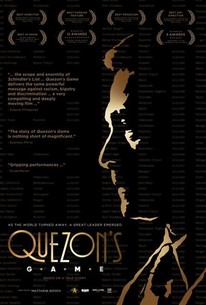 Based on a true story of Holocaust heroism during World War II in the Philippines by Filipino President Manuel L. Quezon--who rescued as many persecuted Jews as Oskar Schindler at a time when most countries were turning their backs--the release of Quezon's Game also marks the landmark 75th anniversary on Jan. 27 of the liberation of Auschwitz, the Nazi's most-notorious concentration camp. Once forgotten to history, the incredible tale of what just one man can accomplish when defeat isn't an option... a miraculous feat of human triumph.

The Gentlemen is Vintage Guy Ritchie

It's a little-known bit of history that first-time features director Matthew Rosen...brought to the screen in a straightforward, efficient film that may not win many plaudits for style or acting but has a story that's never less than fascinating.

The story is a real-life political chess game with the makings of a gripping race-against-the-clock thriller; but here it drags out into sluggish, dull and unconvincing melodrama.

It may not always qualify as great cinema, but when it comes to presenting a fascinating, emotionally rewarding history lesson, you'll be hanging on every scene.

This political back-and-forth is... cheapened by the broad, near-hagiographic strokes with which Rosen paints his leading characters, who spend most of the run-time speechifying between stagy puffs of cigars.

"Quezon's Game" is both a very important and a very well-directed, shot and acted film and a must see for every fan of historical-political films.

The film doesn't really pack the emotional punch it should on screen. Instead it goes at a gentler pace and never really manages to capture on the edge of your seat tension.

Quezon's Game is a compelling labor of love, in part because it's a thrilling story, but also because of the leading man.

Unfortunately the film is not worthy of its subject, being too melodramatic and stultifyingly verbose....Good intentions cannot compensate for clumsy execution.

Limits to the budget and acting ability dampen its vision, but the script is surprisingly frank about the island-packed country's rocky road to independence.

The historical value of Quezon's Game is certainly high, but it sadly falls short in too many other crucial areas.

One can forgive much of a movie whose spirit is so willing. And the history it tells is stirring.

There are no featured reviews for Quezon's Game at this time.