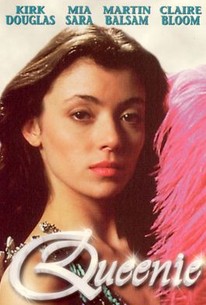 The two-part TV movie Queenie was adapted from the roman a clef by Michael Korda. This is the story of Queenie Kelly,an English girl (Mia Sara) from the slums of Calcutta who is kept from full knowledge of her Indian heritage by her protective mother (Jean Simmons). As a means of bettering herself, Queenie moves to London, where she works as an exotic dancer. Later on, Queenie, using an assumed name, becomes a famous movie star and marries a powerful producer. At the point, we should observe that "Queenie" was the nickname of Michael Korda's aunt: actress Merle Oberon, who was married to British film mogul Alexander Korda. Any resemblance to actual persons living or dead is purely...well, you know. And any resemblance between awkward newcomer Mia Sara and the ultra-sophisticated Merle Oberon is...well, accidental. Queenie originally aired May 10 and 11, 1987.

There are no critic reviews yet for Queenie. Keep checking Rotten Tomatoes for updates!

There are no featured reviews for Queenie at this time.