Puzzle of a Downfall Child1970 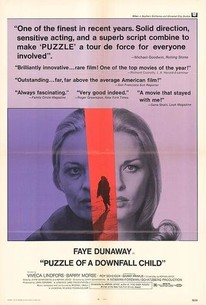 Puzzle of a Downfall Child Photos

In this provocative drama, Lou Andreas Sand (Faye Dunaway) is an emotionally disturbed fashion model who tries to pull her life together. Aaron (Barry Primus) is the photographer who makes her famous, and Mark (Roy Schieder ) is the wealthy man who dates the troubled girl. After a suicide attempt, Lou recalls her story in flashbacks while Aaron visits the retired model in her seaside cabin on the East Coast. She resigns herself to a life of pills and booze and she tries to fill in the blanks of her turbulent career as Aaron listens to the tragic tales of the confused and miserable model. Lou is obviously troubled by her many sexploits and unsure of what to make of them. At one point she discusses what was clearly a rape, but what she calls a passionate encounter. She also talks about how she was the protégé of a lesbian model who helped her rise to the top and then became jealous when she announced that she was to marry. In speaking of her fiancé, Lou becomes vague and distant even when talking about how she jilted him at the courthouse where they were to be wed. Afterward, she loses an important photo shoot in Paris and she blames her fiancé for that and for the resulting decline in her career and her mental health.

Sam Schacht
as George
View All

Critic Reviews for Puzzle of a Downfall Child

The film is as static, boringly camp-elegante and fatuous as a stack of flop issues of Vogue.

While the debut directorial effort of former fashion photographer Jerry Schatzberg often impresses in its own right, no amount of now dated technical inflation can disguise the film's basic anemia or a plot which is still tattered and threadbare.

Audience Reviews for Puzzle of a Downfall Child

There are no featured audience reviews yet. Click the link below to see what others say about Puzzle of a Downfall Child!

Puzzle of a Downfall Child Quotes