Pusher II: With Blood On My Hands2004 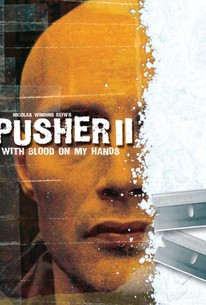 Pusher II: With Blood On My Hands Photos

Upon skinhead Tonny's release from jail, he begins working for his gang boss father as a car thief and finds out he has fathered a child.

Zlatko Buric
as Milo
View All

Critic Reviews for Pusher II: With Blood On My Hands

In Refn's skilled street-realist hands, the child becomes a potent, wailing metaphor for Tonny's own dilemma of rudderless need.

Works best when it's dwelling on the disconnect between Mikkelsen's lurid imagination and his disappointing reality.

Mads Mikkelsen shines in this portrait of a criminal whose world is falling apart, and who sees only one way out of his tortured world: saving the life of an innocent.

Mikkelsen anchors the film with a tremendous presence that sells even the most soap-operatic moments with a lacerating clenched-teeth honesty.

Doesn't so much carve out new ground as merely provide jolt after electric jolt.

An ugly urban story not meant for the genteel.

Second in a trilogy about Copenhagen drug dealers. Sardonic comedy in the "Goodfellas" vein.

There's virtually no limit to how far Mikkelsen's sorry, sad character will go when he's pushed, and the story ends on a very chilling note.

...in many ways resembles 2005's Cannes winner L'Enfant another film about a posturing street thug who finds his humanity from the child he does not want.

Part of a trilogy about Copenhagen criminals, this one features a terrific performance by a Vin-Diesel lookalike who runs rings around the American actor in ability.

Audience Reviews for Pusher II: With Blood On My Hands

Continuing the story from the first film, Nicolas Winding Refn's follow-up Pusher II builds upon what the first film did, and follows the release of Tonny from prison and his return to the criminal underworld in Denmark. Brilliantly acted and directed, this is an engaging drama that will definitely please fans of Refn's original work. Building on the formula established in the first film, Pusher II amps up the stakes, and presents yet another raw, gritty portrait of the Denmark criminal underworld. What stands out here is that Nicolas Winding Refn crafts a film that tells a thoroughly engaging story, and focuses more on great characters and plot than visuals. What he does is make a standout picture that doesn't have mindless thrills, and it's a smart, thrilling picture that uses the power of telling a tense, memorable story that makes this sequel standout. Add to that, a tense atmosphere of raw power that elevates the tone of the movie, and it makes you feel as if you're in the film. Refn is a terrific storyteller, and he crafts a vivid, gritty crime drama that is engrossing from the moment it starts. With simple ideas, Nicolas Winding Refn has crafted a stunning follow-up to his debut, a film that ranks up there with some of the finest sequels ever made, and he is clearly understanding of the genre, as he displays a knack for telling a pulse pounding, unforgettable epic of crime. This is cinematic art, a film that oozes with style and story to really grab your attention, and it does so by having a director who clearly captures the chaos of the criminal underworld in a way that makes for a truly unique piece of cinema. Nicolas Winding Refn has always made powerful films, but with this sequel, he steps up his game, and really he hasn't topped it, not even with Drive and Only God Forgives because there is something present here that just makes this film standout in the crime genre.

It's better than the original, Pusher works all sorts of magic, it redefines the criminal underworld genre. It is not a gangster story but a down and dirty story of criminals and their attempt to be successful but ends up to be their finish. It shows a gritty and realistic side of this world and pulls no light punches what so ever. Director, Nicolas Winding Refn continues to show great depth to a chilling and ugly atmosphere and characters to go along with it. It's harsher than the original, yet you have more affection for it. Mads Mikkelsen carries this film perfectly, he starts out from the first as this awful addict-drug pusher and now is trying hard in his own way to do the right thing. Mikkelsen is tremendously honest, terrific and bloody brilliant. It's stylish, energetic and has its own beat.

Gritty urban drug drama with a finely judged performance from Mikkelson balancing his character's aggressive front and deep seated insecurities - you end up empathising with him despite his repellent actions.

I always cite this film when people say that sequels are never as good as the original. Refn, in serious debt at the time, creating sequels that not only took these films in a new direction, but gave them a heart. This film is equal parts aggressive, intense, heartbreaking, and thoughtful. It is a great film.

Pusher II: With Blood On My Hands Quotes