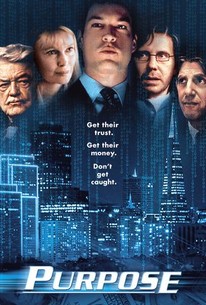 An Internet entrepreneur looking to revolutionize the way the world wide web is utilized finds out that there's more to the saying "the road to hell is paved with good intentions" than he ever imagined in this tale of innovation soured, helmed by greedy dot-com cynic Alan Ari Lazar. As the personal home-computer revolution reaches a fever pitch, visionary tech innovator John Elias dreams of shattering national borders and changing the way computer users communicate with the outside world; and with Robert Jennings closing the deal, it appears as if Elias may finally have the opportunity to make his dreams a reality. As fast as the money starts rolling in though, Elias quickly loses himself to the intoxicating effects of success, isolating himself from his business partners and girlfriend and losing site of his original goals. Despite the fact that Elias let fame go to his head, where there's a will to succeed there's a chance for redemption, and before the book on his success story reaches the final chapter, the well-intending dot-com king may finally make amends for the pain his greed has caused to those he cared for most.

There are no critic reviews yet for Purpose. Keep checking Rotten Tomatoes for updates!

There are no featured audience reviews yet. Click the link below to see what others say about Purpose!