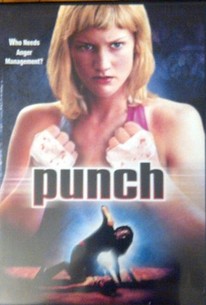 A teenage girl still reeling from the death of her mother finds a novel means of venting her anger in the feature directorial debut from filmmaker Guy Bennett. It's been years since Ariel's (Sonja Bennett) mother died in a tragic accident, and ever since that fateful day, the increasingly troubled girl has isolated herself from society while forming an unhealthy fixation on her devastated father, Sam (Michael Riley). When Sam invites Mary (Marcia Laskowski) over for his first date in years, Ariel explodes -- attacking her father's frightened guest in a jealous rage. When Mary reveals that her sister Julie (Meredith McGeachie) is a prize fighter in the underground world of topless boxing, Julie decides to take up the sport as a means of coping with the lingering pain of her mother's death.

Stephen Dimopoulos
as Customer
View All

Punch is a fascinating curiosity, in some ways as confused and unresolved as its characters.

This is a good premise, but written and acted in a fashion that rings false.

A flawed film that despite having some curiosities ends up looking too smart for its own good.

[B]izarre, would-be literary exploration of incestuous father-daughter attraction, anger management, and women beating the crap out of each other...

In some respects, Punch still packs some, but it will leave you feeling woozy and glad when the bell rings.

Ariel seems too dependant on her dad Sam. When this dependency is threatened by Sam's girlfriend (Mary), Ariel punches her. It turns out that Mary's sister is a boxer. Who knows what will happen?