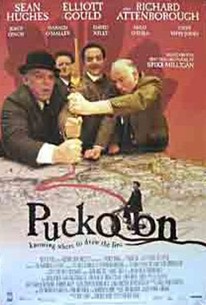 Based on the best-selling novel by Irish comedian Spike Milligan, Puckoon is a political satire about a town cut in half by the partitioning of Northern Ireland and the Irish Free State in 1924. The action takes place in a town known as Puckoon where an ordinary fellow named Dan Madigan wakes up one day to find barbed-wire fences running right through his neighbors' houses. All at once, Madigan's friends begin altering their personalities to suit the side of the fence they've found themselves on. So it's up to Madigan, the last sane man in town, to restore order. Originally written in 1963, Puckoon is considered the forerunner of anti-humor comedy which became the staple of shows like Monty Python and Saturday Night Live. ~ Connor McMadden, Rovi

There are no critic reviews yet for Puckoon. Keep checking Rotten Tomatoes for updates!

There are no featured reviews for Puckoon at this time.