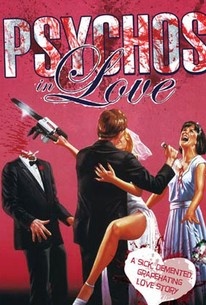 Joe (Carmine Capobianco) is a bartender and a psychotic killer who falls in love with the woman of his dreams in this horror comedy. Kate (Debi Thibeault) is a manicurist who shares Joe's penchant for committing gruesome murders. The two meet, fall in love, and make plans to combine forces in the murder of Nikki (Cecilia Wilde), a topless dancer in a local club. Stabbed repeatedly, the victim stays alive and spurts copious amounts of red corpuscles until Joe hits her in the head with a frying pan. When the garbage disposal breaks after being stuffed with too many body parts, the couple calls for the plumber Herman (Frank Stewart). Fortunately for Joe and Kate, Herman is a fellow psycho and cannibal who agrees to work for body parts.

Shawn Light
as Girl in Sauna

Barry Clark
as Man in Restaurant

Professor Morono
as Joey the Creep

Carla Bragoli
as Girl in Woods

Patti Chambers
as Girl in Bed

Christopher Frank
as Man at Picnic

Carrie Gordon
as Girl in Toilet

Angela Nicholas
as Dianne
View All

Critic Reviews for Psychos in Love

Love finally cures them of their murderous ways, but not before a lot of grotesquely comic gore and "splatter" scenes.

Audience Reviews for Psychos in Love

There are no featured audience reviews yet. Click the link below to see what others say about Psychos in Love!