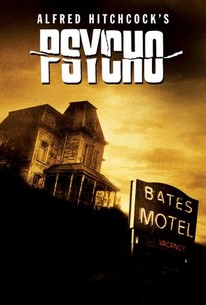 Critics Consensus: Infamous for its shower scene, but immortal for its contribution to the horror genre. Because Psycho was filmed with tact, grace, and art, Hitchcock didn't just create modern horror, he validated it.

Critics Consensus: Infamous for its shower scene, but immortal for its contribution to the horror genre. Because Psycho was filmed with tact, grace, and art, Hitchcock didn't just create modern horror, he validated it.

Critic Consensus: Infamous for its shower scene, but immortal for its contribution to the horror genre. Because Psycho was filmed with tact, grace, and art, Hitchcock didn't just create modern horror, he validated it.

In 1960, Alfred Hitchcock was already famous as the screen's master of suspense (and perhaps the best-known film director in the world) when he released Psycho and forever changed the shape and tone of the screen thriller. From its first scene, in which an unmarried couple balances pleasure and guilt in a lunchtime liaison in a cheap hotel (hardly a common moment in a major studio film in 1960), Psycho announced that it was taking the audience to places it had never been before, and on that score what followed would hardly disappoint. Marion Crane (Janet Leigh) is unhappy in her job at a Phoenix, Arizona real estate office and frustrated in her romance with hardware store manager Sam Loomis (John Gavin). One afternoon, Marion is given $40,000 in cash to be deposited in the bank. Minutes later, impulse has taken over and Marion takes off with the cash, hoping to leave Phoenix for good and start a new life with her purloined nest egg. 36 hours later, paranoia and exhaustion have started to set in, and Marion decides to stop for the night at the Bates Motel, where nervous but personable innkeeper Norman Bates (Anthony Perkins) cheerfully mentions that she's the first guest in weeks, before he regales her with curious stories about his mother. There's hardly a film fan alive who doesn't know what happens next, but while the shower scene is justifiably the film's most famous sequence, there are dozens of memorable bits throughout this film. The first of a handful of sequels followed in 1983, while Gus Van Sant's controversial remake, starring Vince Vaughn and Anne Heche, appeared in 1998. ~ Mark Deming, Rovi

George Eldredge
as Chief of Police

Alfred Hitchcock
as Man Outside Office in Cowboy Hat

It is one of [Hitchcock's] most brilliantly directed shockers and also his most disagreeable.

A brilliant technical exercise, an intimate character study, and the ultimate variant on the premise "boy meets girl."

Paramount won't let anyone enter theatres where Psycho is playing after the picture starts. No one will want to leave before it is over.

The obvious thing to say is that Hitch has done it again; that the suspense of his picture builds up slowly but surely to an almost unbearable pitch of excitement.

Even now, it's distinctly unnerving.

After half a century of terror, Psycho is still ensuring that no one feels safe in the shower.

Even though Psycho isn't as terrifying under today's cinematic standards, the film stands out as one of Alfred Hitchcock's finest achievements.

Psycho comes nearer to attaining an exhilarating balance between content and style than anything Hitchcock has done in years. Of course, it is a very minor work. But its virtues of tension, surprise, virtuosity and control are all major ones.

Alfred Hitchcock's latest is not his customary comedy-thriller but a gruesome horror tale with overtones of spiritualism and the padded cell, although as usual the master's tongue is occasionally in his cheek.

The beauty of Psycho is also that it is an art film masquerading as a genre film; though it is not in any way remote or inaccessible.

I think the film is a reflection of a most unpleasant mind, a mean, sly, sadistic little mind.

Hitchcock ingeniously puts himself one step ahead of us. They don't call him the master for nothing: we're just followers, guinea pigs he's tickled to toy with.

A seminal classic of horror by master Alfred Hitchcock, with some of the most memorable iconic scenes in the history of Cinema. Tense, horrific and a superb lesson in filmmaking, it offers well-constructed characters, a lot of revealing dialogue and a huge regard for details.

Hitchcock's classic "comedy" featuring the world's most famous mother's boy is one of the most influential films ever made; every serial killer and slasher movie owes something to this, one of the true greats of cinema. Unfortunately, as the character of Norman Bates is SO infamous, this is one of those films I wish I could forget I had ever seen and watch it with fresh eyes, but it is still fascinating to watch the awkwardly shy and fresh-faced Anthony Perkins knowing how the story plays out, especially during the exchange between he and Janet Leigh in the parlour. The only minor flaw is the fact that the first act is stronger than the second inevitably meaning a slight anti-climax, especially since the final scenes include the psychiatrist's speech explaining all which is clearly irrelevant in this day and age when the concept of multiple personalities is common knowledge. This is countered however by the brilliantly creepy final shot of Perkins as "mother", who wouldn't even hurt a fly...One of those films that I still find gripping every time I see it.

What can one say about one of America Cinemas great movies. Classic film from the master of suspense. Iconic scenes and acting abound!