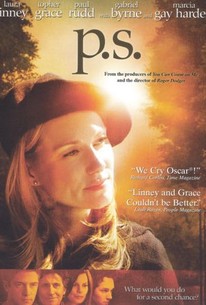 Critics Consensus: Laura Linney is as watchable as ever, but the melancholy P.S. never finds its footing.

Critics Consensus: Laura Linney is as watchable as ever, but the melancholy P.S. never finds its footing.

Critic Consensus: Laura Linney is as watchable as ever, but the melancholy P.S. never finds its footing.

Directed by Dylan Kidd, P.S. follows Louise Harrington (Laura Linney), a divorcee who works in Columbia University's School of Fine Arts and at first glance seems utterly satisfied with her life. The thirties-odd woman has found success in the workplace, is respected among her peers, and is fairly confident in her own abilities -- yet, she can't help but feel something is missing. When she arranges to interview a prospective student at least 15 years younger than she is, she's shocked to find out he is the spitting image of her high-school sweetheart, an artist who had died in a tragic car accident before they graduated. After the interview, Louise and Scott (Topher Grace) waste no time before getting romantically involved. Their motives aren't entirely clear -- Louise may be longing for her former flame, while Scott could be trying to assure himself a position in the Ivy League by whatever means necessary -- but that doesn't stop them. Elsewhere, Missy (Marcia Gay Harden), Louise's best friend from high school makes a play for Scott herself. Complicating issues further is the looming presence of Peter (Gabriel Byrne), Louise's ex-husband, and her recently sober brother (Paul Rudd).

Ross A. McIntyre
as Jimmy

Even the always radiant Laura Linney can't save this misbegotten film.

Linney directs her scenes from within them, holding our attention and keeping the focus on her confusion, her pain and her hope.

Both genders are programmed by eons of Darwinian genetic strategy, and so we believe them, and because Linney and Grace are sexy and play well together, the age gap is not a barrier so much as additional seasoning.

Despite an excellent supporting cast something in p.s. goes mushy and implausible.

Can't seem to make up its mind whether it's a romantic comedy, a drama or a psychological thriller and settles for being an odd -- and unbelievable -- hybrid of all three.

We have a talented director, and a wonderful cast -- but for me this is a near-miss.

The only reason to this ultra-modest, underwhelming indie is Laura Linney's performance as a mature woman falling for a man half her age.

A hidden gem, worth hunting for...

The actors elevate the material a bit, but they can't escape the fact that the movie only has vague goals set for itself.

It's a romantic comedy-drama that's every bit as unpredictable, offbeat and assured as Kidd's first film, although some third-act problems keep it from real greatness.

p.s. is a showcase for Linney, who juggles Louise's many self-contradictions ... in a bright and humor-filled performance.

An admissions officer for Columbia gets involved with an applicant whose name reminds her of a man from her past. The performances by Laura Linney and Topher Grace save this film from the miasma of self-indulgence that it threatens to fall into. Linney, in particular, conveys a whole palette of emotion, from insecure lust to confident determination, and Grace sprinkles in sensitivity to his douchey character. While the plot doesn't pay off and there's an important scene in a hotel room that leaves the audience wondering if it got spliced in from another movie, the story is good enough to provide Linney opportunity to show off her acting chops. Overall, I like Linney enough to follow her into this poorly constructed film.

Cast: Laura Linney, Topher Grace, Gabriel Byrne, Marcia Gay Harden, Paul Rudd, Lois Smith, Jennifer Carta, Ross A. McIntyre, Chris Meyer, Becki Newton, Stacy Lynn Spierer Director: Dylan Kidd Summary: College admissions officer Louise Harrington (Laura Linney), a divorced woman in her late thirties, is looking for someone special enough to put her heart on the line, but the only man she's ever loved died 20 years ago. When a college applicant, Scott (Topher Grace), appears to be her true love reincarnated, will Louise finally find the happiness she seeks? Or is Scott just playing along to get into the Ivy League? My Thoughts: "Wonderful cast. I wasn't blown away with the story, but it was definitely interesting. Louise Harrington, is a woman longing for the past. She spends her time thinking about the "what ifs" in life. When F. Scott Feinstadt comes in the picture is when it gets odd. He looks, speaks, and acts just like her high school boyfriend and happens to share his name. She comes somewhat intrigued with him and a bit obsessed. The whole story is a bit weird and it never really goes anywhere. But interesting none the less."

Odd, but it was pretty good.

The most beautiful parts of the movie don't really push the plot forward: F. Scott "painting" Louise, Louise's imagine-yourself monologue. And by plot, I mean the "metaphysical" quandary that is the supposed donnee of the movie. The real let-down is that there IS no metaphysical payoff; it's all just coincidence that F. Scott resembles Scott so much. Decent performances but F. Scott's is such a douche. If he's really not the dead-lover-reincarnated, I don't find his personality redeemable enough for Louise to actually fall for him.