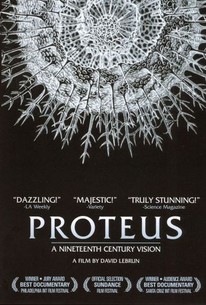 Filmmaker David Lebrun casts his eye on the evolution of art, science, and the world around us in this fusion of documentary and experimental forms. Ernst Haeckel was a 19th Century biologist with a keen interest in art; he found a way to merge these two disciplines when he published the book Art Forms in Nature, in which he offered detailed sketches of nearly 4,000 different single-celled organisms. As Lebrun tells the story of Haeckel and his work, he meditates upon the vision shared by the artists and scientist and other great minds of the age, and uses Haeckel's images as a jumping off point for his own visual explorations. Proteus received its world premier at the 2004 Sundance Film Festival.

Grounded by the stark physicality of the location and the emotional charge generated by those prison-bound passions (Jean Genet would have approved).

Is it a movie or the best-designed episode of Nova ever?

Problematic on almost all levels.

Involving and affecting even if it is not completely coherent or fully realized.

Clearly attempting to make the story relevant for contemporary times, they use a variety of stylistic devices that serves to have the opposite effect, distancing us from a story that might have been far more compelling if rendered in a direct fashion.

The movie's pretty much a stinker.

The problem with Proteus is that the issues tend to overwhelm the story, and one is never fully engaged in the narrative.

Frankly steamed sex scenes spice the film from John Greyson and Jack Lewis, gaining it entry to gay festivals but only momentarily rousing it from the fetid doldrums of a fatiguingly 'instructive' story.

The biggest failing of the movie is that it focuses on the scientific experiments and the facts of the case instead of the emotion of the situation.

An intelligently rendered film (shot on video) that doesn't seek to make its central characters overtly sympathetic even as it stresses the human rights so thoughtlessly or deliberately denied them.

Carries an air of forced-wit experimentation that never quite gets its anachronisms in order.

Yuck! What is this thing supposed to be? What it is, is a mess.