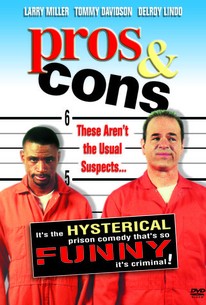 In this comedy, a mild-mannered accountant (Larry Miller) finds himself behind bars after he becomes unwittingly implicated in an embezzlement scandal engineered by his boss. Left to fend for himself in prison, the accountant makes friends with another inmate who was railroaded (Tommy Davidson), and with the help of the kingpin of the jailhouse gang (Delroy Lindo), they hatch a scheme to break out of the big house and get revenge on the people who sent them there. Pros & Cons also stars Julie Warner, Darren McGavin, and David Rasche.

Critic Reviews for Pros and Cons

There are no critic reviews yet for Pros and Cons. Keep checking Rotten Tomatoes for updates!

Audience Reviews for Pros and Cons

There are no featured audience reviews yet. Click the link below to see what others say about Pros and Cons!