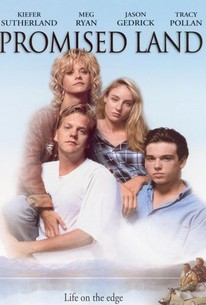 Three friends face the disappointments of adulthood in this drama. Growing up in Ashville, Utah, a small town where traditional ideals still cling stubbornly to the hearts and minds of youth, Davey Hancock (Jason Gedrick) is the star of the high school's championship basketball team. Pretty cheerleader Mary Daley (Tracy Pollan) is Davey's girlfriend, and bright Danny Rivers (Kiefer Sutherland) is his best friend. Two years after graduating from high school, reality has dimmed their dreams; while Davey won a college scholarship to play ball, he washed out of the team and ended up back in Ashville, where he's now a police officer. While Davey still sees Mary, she wants more out of life than Ashville or her relationship with him can give her. And when Danny, who has spent much of his time since high school drifting in search of an ambition, returns to town to visit Davey and Mary, he brings along a surprise -- Bev (Meg Ryan), a drug-addled floozy with an unstable personality (and a gun) whom he married in Las Vegas three days earlier. Promised Land was also released on home video under the title Young Hearts. ~ Mark Deming, Rovi

Michael Ruud
as Cowboy in Casino

Gene Pack
as Mayor of Ashville

Promised Land tries hard to win you over but finally wears you down with its sincerity.

The film has a lot going for it though, with its beautiful snowy landscapes, empty highways, and committed playing from the cast.

Many scenes are extended to the point that all potential dramatic tension is drained out of them.

Gedrick and Pollan give character to the cliche's with their heartfelt work, and Sutherland and the show-stealing Ryan bring depth and weight to a potentially tiresome pair.

A smart and well constructed drama.

The photography of the mountains, plains, and huge Western skies is gorgeous, and Hoffman's use of the camera is occasionally dazzling.

Offers a minor slice-of-life look at the dashed hopes of privileged youth.

Capable, believable performances cannot make up for a plot that is simply not there.

There are no featured audience reviews yet. Click the link below to see what others say about Promised Land!