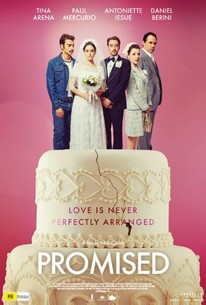 In Melbourne in 1953, ﬁve year old Robert (Daniel Berini) and newborn Angela (Antoniette Iesue) are promised in marriage by their fathers, Sal (Mercurio) and Joe. Against the misgivings of Angela's mother (Arena), Sal is insistent that he must uphold his promise to Joe -- a connected man. Fast forward to 1974, and Angela is now a beautiful, intelligent and modern lady whose aspirations lie well beyond the family pastry shop. Robert, now 25, has just returned home from studying law abroad at Oxford. Despite changing times, fading traditions and Angela's love for another man, she is still expected to marry Robert. As a web of secrets, lies and revelations surface, it teaches everyone involved that love, like life, can never be perfectly arranged.

It's not a particularly stylish film... But there's a simmering good humor to it and a sense of reality that turns its ordinariness into a virtue.

Promised lacks sophistication and craft ... Still, there's something charming about this film ... an imperfect movie that nonetheless captures something that feels real and valuable.

There is a migrant story here perhaps worth telling, as well as a study of changing socio-cultural mores and the rise of feminism, but it's all so drably done that even the staunchest Aussie cinema groupie might struggle to care...

While 'Promised' may not have the depth, it certainly has the heart.

Offers a nuanced exploration into an outdated practice, it's effect on a community, and the relationship between a couple at a crossroad in their lives.

There are no featured reviews for Promised at this time.