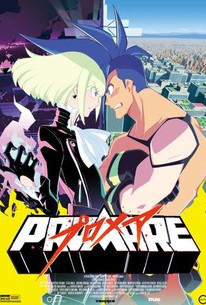 Critics Consensus: Visually dazzling and narratively exhilarating, Promare is a colorful thrill ride that should entertain adult anime enthusiasts as well as the teens in its target audience.

Critics Consensus: Visually dazzling and narratively exhilarating, Promare is a colorful thrill ride that should entertain adult anime enthusiasts as well as the teens in its target audience.

Critic Consensus: Visually dazzling and narratively exhilarating, Promare is a colorful thrill ride that should entertain adult anime enthusiasts as well as the teens in its target audience.

The first feature-length film from the acclaimed studio TRIGGER, creators of the hit series KILL la KILL and Little Witch Academia, and director Hiroyuki Imaishi (GURREN LAGANN, KILL la KILL), Promare uses a bold cel-shaded visual style to tell a blistering action-adventure story, and is the spiritual successor to many of director Imaishi's former works. Thirty years have passed since the appearance of the Burnish, a race of flame-wielding mutant beings, who destroyed half of the world with fire. When a new group of aggressive mutants calling themselves Mad Burnish appears, the epic battle between Galo Thymos, a new member of the anti-Burnish rescue team Burning Rescue, and Lio Fotia, the leader of Mad Burnish begins.

As delightful as it is demented.

The film is nearly two hours long and passes in what feels like 45 seconds. It is wildly entertaining and blaringly ridiculous, and I want to watch it every night for a week.

While the overall tone is pitched to a teen demographic, the creative energy and the execution on display is consistently engaging.

"Promare" checks all the conventional anime boxes - post-apocalyptic setting, mecha suits and plenty of fan service - but it's still an exciting watch.

After seeing every leaf on every bush in so many features, it's fun to sit back and enjoy a film that pushes its look and palette beyond mere reality to create a fantasy world that could exist only in animation.

This visual potion spiced with fiery duels and supernatural machinery is at its most potent when taken without much concern for its bewildering mechanics.

[The] results arrive as though by the seat of the filmmakers' pants. This artistic choice maintains a desire to always have at least one more surprise up their sleeves.

Promare is in your face like an early morning TV programme for three-year-olds. It demands a certain amount of energy and staying power but if you're a dedicated fan of this kind of animé, you'll find it a treat.

It's a collage simultaneously flat and spacious, abstract and enthralling. Often the frame is so packed with Burnish fire travelling in all directions that one might wonder how the viewer can parse the action at all.

The chemistry between the characters oozes brilliance and makes you hope that there is more to explore within this world.

There are no featured reviews for Promare at this time.